The NRL will hold the NSW government to ransom as the ugly fallout from a new phase of the Sydney stadium wars threatens to spill into the courtroom and strip the state of lucrative grand final hosting rights.

Following months of uncertainty over whether a handshake agreement to rebuild a cluster of suburban stadiums would proceed, Premier Dominic Perrottet on Tuesday evening told the NRL he would not commit to a timeframe for investment and would prioritise funding for flood reconstruction.

“I find it appalling that they’re using human tragedy of the floods to renege on an agreement,” the powerful chair of the Australian Rugby League Commission, Peter V’Landys, told the Herald. 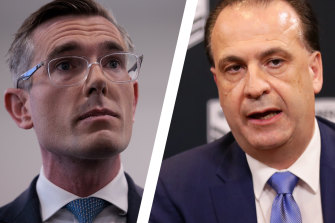 The government’s decision triggered an angry confrontation in the premier’s office between Perrottet and V’Landys, who has now devised a strategy that could trigger a legal battle over the future of Stadium Australia at Sydney Olympic Park.

Under a 2018 agreement struck by the then premier Gladys Berejiklian, the NRL grand final would remain in Sydney until 2042 on the proviso the Olympic venue would be reconfigured into a 70,000-seat rectangular stadium at a cost to taxpayers of about $800 million.

The government abandoned the plan during the pandemic and V’Landys claims he had secured a verbal commitment from Berejiklian and also Perrottet for between $250 million and $350 million to instead be spent upgrading stadiums in Cronulla, Manly, Leichhardt and Newcastle. 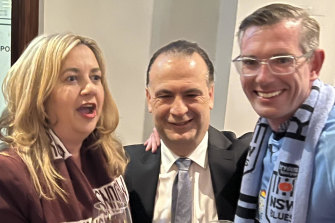 While there is nothing in writing that will force the government into honouring any suburban ground funding, the NRL believes the original agreement for Sydney Olympic Park still stands.

Sources have told the Herald that the NRL alleges there is a legally binding agreement to invest $800 million into the upgrade of Stadium Australia and will hold the government to the deal despite the code’s preference for money to be redirected into boutique stadiums.

“When you consider the billions of dollars they spent in the recent budget, the amount they need to honour our agreement is insignificant,” V’Landy’s said. “We will press that they honour the original agreement, which will cost the NSW taxpayer more due to the way they have handled this.”

The NRL spent Tuesday exploring its legal options and has one of the country’s most respected barristers, Alan Sullivan QC, at its disposal on the ARL Commission.

In a statement, Perrottet said the government remained committed to upgrading suburban stadiums but natural disasters and the COVID-19 pandemic meant investment should be staged. 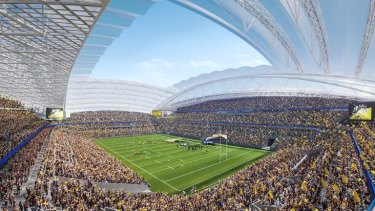 An artist impression of what Stadium Australia was meant to look like with an $800 million refurbishment.

“The government has just received the Floods Inquiry Report, which will likely require a significant cost to the taxpayer, and I note right now there are still 1366 people without a home in NSW due to flooding,” he said.

“It should come as no surprise that my top priority is therefore supporting those devastated by the major floods across NSW.”

The NRL’s showpiece event, the grand final, is now in danger of being moved from Sydney to Brisbane as the Queensland government prepares to swoop in and steal the decider.

Asked about the future of the event, V’Landys relied: “Everything is now back on the table. It will be a board decision, not mine.”

Sports Minister Stuart Ayres, who is fighting to remain in cabinet over his involvement in the John Barilaro New York trade job scandal, said it would be “an extraordinary move” for the NRL to take the grand final to Queensland.

“We’ve got to make sure that we make investments that are in the best interests of the people of NSW,” he said. “It just might mean that we have to wait a little bit longer before we can spend additional money on those venues.”

While plans to rebuild suburban stadiums such as Leichhardt and Newcastle have now been put on ice, a $300 million redevelopment of a stadium in Ayres’ seat of Penrith will go ahead.

“The government’s management of its stadia policy from the outset has been amateurish and embarrassing,” Hagipantelis told the Herald.

“I assume if the state government is to backflip on its commitment to fund suburban stadiums, then the $300 million committed to the Penrith stadium can now be better utilised for schools and hospitals?

“It would be outrageous for Penrith to retain its stadium for the obvious political benefit of its local member.”

The June state budget pledged $113 million over the next four years to deliver three new training facilities for male and female rugby league players for the Bulldogs (Belmore), Dragons (University of Wollongong) and Eels (Kellyville Park).

Our Breaking News Alert will notify you of significant breaking news when it happens. Get it here.