No go ahead for De Goey from Saints board… yet

St Kilda’s board has asked the Saints’ football department for more information on Jordan De Goey before consenting to an aggressive pursuit of Collingwood’s free agent star.

The Saints, while having expressed interest in De Goey, have yet to formally rule on whether they will table an offer for the talented but strife-prone midfielder/forward, who is weighing up his future beyond 2022.

The potential recruitment of De Goey was an agenda item at a meeting of the St Kilda board last Thursday night, when the board asked the club executive to gather more detailed information on De Goey. The board wanted to be satisfied that he was the right fit for the Saints, on and off the field. 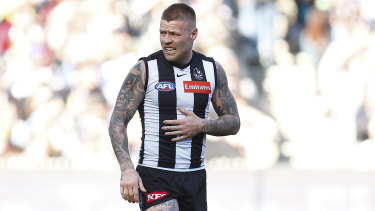 Sources familiar with St Kilda’s stance on De Goey said the Saints’ board wanted to be sure that the free agent fitted the “whole picture” at Moorabbin, including the team’s leadership and values.

Implicitly, sources said the question was also being posed if De Goey could help make the difference in St Kilda winning a premiership – a question that involved an assessment of the club’s list as well as De Goey’s talents and character.

De Goey’s future is up in the air at Collingwood after a filmed incident at a Bali nightclub in June that went viral and prompted the Magpies to pull their contract offer of two years with a trigger for another two years at more than $800,000 a season.

While the Bali footage of attempting to pull aside a female friend’s bikini top brought no formal consequences and the woman involved defended De Goey on Instagram, Collingwood was still concerned that the 26-year-old had found trouble and put off any contract discussions until the season’s end.

De Goey had been placed on notice by the Magpies following his arrest last November in New York, which saw him plead guilty to a lesser charge of harassment following an altercation at a night spot. The club had been happy with his attitude and form in 2022 after he was stood down for a period in the wake of the New York arrest.

St Kilda coach Brett Ratten and chief operating officer and football boss Simon Lethlean have previously confirmed they are considering De Goey as a free agency/trade target. Geelong also has shown interest in De Goey, but the Cats have their sights on Giant Jacob Hopper, who is contracted, and it is unclear whether they can accommodate more than one relatively costly recruit.

Former St Kilda champion Nick Riewoldt has questioned the capacity of St Kilda’s team leaders to have the hard conversation with a player such as De Goey.

“If I’m Geelong and Jordan De Goey walked through the door, then Joel Selwood, Tom Hawkins, Patrick Dangerfield, they grab him and they say ‘you’re gonna do it the Geelong way’,” he said.

“Who’s having that conversation if Jordan goes to St Kilda?”

The Magpies say that De Goey would like to stay at Collingwood, but the decision, as with clubs such as St Kilda, is not confined to the coaches and football department at his current club, given his misconduct and the media fallout that any further slip ups would bring.

De Goey, aside from the Bali issue and a brief quadriceps injury, has been an important contributor to Collingwood’s unexpected rise to the top four this year. He was among their best in the six point victory over Port Adelaide, earning seven votes out of 10 from the coaches.

“You’re looking at the on-field performance, and you’re looking at what you’re trying to build as a football club and culture and that as well,” Ratten said in late June, when confirming the club was looking at De Goey. “So we take in both sides of the equation, and then we make decisions around there and all those free agents will be singled out and sort of maybe targeting one or two, if it’s possible.”