Newman set to miss round one, De Koning on track for early comeback

Carlton defender Nic Newman looks all but certain to miss the round one season opener against Richmond, with the former Swan suffering a setback as he returns from a serious knee injury.

However, in more promising news on the club’s injury front, highly touted young ruckman Tom De Koning could be back earlier than expected after overcoming a back complaint.

Newman missed the majority of the 2020 season after rupturing his patella tendon in round two, but he’d been recovering well and taking part in most of the pre-season before his latest setback. 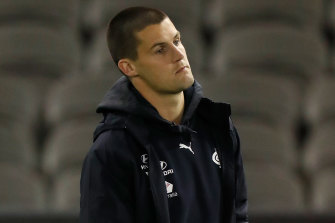 “Newy was going really well with his knee; he got back into the full ball program and was doing game play,” Blues fitness boss Andrew Russell said.

“His patella tendon looks really good, which is the injury he had last year, but the back of the kneecap is a bit inflamed at the moment. We’re still deciding what that means and how much training he’s going to miss.

“We need a bit more information to find out how long it will [take to] settle down and he will be playing footy, but it probably won’t be at the start of the season.”

The club had previously stated that De Koning – who impressed in his seven games last year – would miss the early stages of the season, but the big man is set to resume running this week.

“He had very low-grade bone stress in his spine. The next day, he had no pain and hasn’t had any pain in his back whatsoever. He feels completely normal,” he said.

“It settled better than we thought it would.

“How quickly he progresses will depend on how good he feels, but, at this stage, we’ll be seeing him early in the season I would think.”

The Blues will have a hit-out with arch rivals Essendon on Thursday before taking on St Kilda in an official pre-season match next week.

The club said Eddie Betts (calf), Levi Casboult (knee) and Mitch McGovern (hamstring) would all miss Thursday’s practice match against the Bombers, but all remain on track for round one availability.