Cameron Munster says NSW will be wasting their time if they think they can get under his skin in Perth as the Maroons prepare to head west to try to wrap up the State of Origin series on Sunday.

The Melbourne maestro was a wonder for Queensland in game one in Sydney, making the difference in a tight contest as he engineered a rare Maroons victory in hostile territory. If Queensland’s pack can get the better of the Blues again, Munster could be the man to set up the chance for a sweep at Suncorp Stadium.

Liam Martin was singled out as the likely agitator for NSW after The Courier-Mail painted the Panthers forward as the man behind “a series of feral plays” as he tried to spark a comeback in the second half.

Munster made light of it at the Queensland camp at Sanctuary Cove on Wednesday, saying he expected more of the same on Sunday and had no problem with the added aggression that can be part of the Origin rough and tumble.

“I like what he brings – competitive and aggression – we’ve had our fair share of tits and tats with each other,” Munster said of Martin. “They’ll come out and try and take my head off, or do things that aren’t usually done.”

Munster and Martin have some history. The former kicked the latter in the Origin opener last year and was duly fined for his outburst. But that was a very different person and player from Munster 2.0, who has tidied up his life off the field and is playing some of the best football of his career.

He said there was a time when he was susceptible to mind games and niggle from opposing players but after 14 Origins had learned to keep his calm on the big stage.

“In previous years I’ve probably been known [to let it] get under my skin and be a lot more, how do I explain, not grubby, but do things I wouldn’t normally do,” Munster said. “I’m not that kind of person but it shows in pressure games when things come out the top of your head. 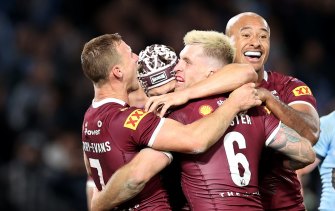 Cameron Munster was a marvel for the Maroons in the Origin opener.Credit:GETTY

“I know they’re going to be coming for me; I will have a lot more heat coming for me … I just [need to] play calm footy.”

Munster also defended Queensland and Storm teammate Felise Kaufusi, who was found not guilty of dangerous contact on Sam Walker and is free to line up for Queensland in the back row.

“I love what he brings, a bit of aggression and he’s a good ball-runner,” Munster said. “It wasn’t ideal for Sam Walker, he’s a Queenslander and we love Queenslanders, but he got his head in the wrong spot.

“There was no malice and Felise is a family man, he’s one of the nicest guys you can meet off the field. He wasn’t going out there to hurt Sam. It’s a contact sport and that’s why we love paying the game.”

Munster was sheepish when confronted with suggestions he was becoming Wally Lewis for a new generation giving his growing list of Origin accolades. But there can be only one Emperor of Lang Park, with Munster playing down his reputation on the back of a single victory.

“It’s a nice accolade, but he’s done a lot more than I have and he’s always going to be the King of Queensland,” Munster said.

“There’s only one Wally Lewis. I don’t want to be pumping the tyres up too much. At the end of the day, it’s just one win.”