Max-imum impact: St Kilda young gun spurs his side to victory in the west

An explosive third-quarter burst by the combination of Max King and Jack Higgins saw St Kilda post their first win of the season, holding out the Dockers in Perth by 10 points after the home side led for the whole first half.

King and Higgins kicked four goals each, seven of them in the second half, to be the heroes in a side with only three goalkickers. They were also brilliantly served by the run of Brad Hill and the leadership of Jack Steele, and defender Josh Battle, who took 13 marks on top of 21 possessions. 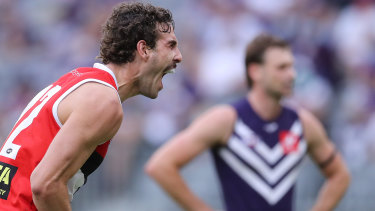 Max King played a starring role for the Saints in their win over the Dockers.Credit:AFL Photos

Fremantle’s loss was further soured by an ankle injury to No.1 ruckman Sean Darcy. Gun midfielder Andrew Brayshaw tried to will his team over the line with 39 possessions, but the Dockers struggled to find a viable path to goal all evening.

Their defence held sway in the first half, with the impressive Hayden Young and Luke Ryan racking up possession behind the ball. But they had plenty to do, with St Kilda dominating entries inside 50 – inaccuracy and untidy delivery into attack limiting them to just four behinds for the first quarter.

The Dockers took their handful of opportunities, and Lachie Schultz manufactured one of his own, knocking a ball heading out of bounds back over his head and straight into the path of Travis Colyer for the Dockers’ second goal, a rare highlight in a match blighted by turnovers and poor ball use.

The Saints didn’t kick their first until Dan Butler scooted away from Joel Hamling six minutes into the second term, Higgins snapping a second to capitalise on a Jordan Clarke kick-in error. But the Saints couldn’t capitalise on their advantage in field position, and Rory Lobb and Brayshaw restored a 13-point lead to the Dockers at half-time. 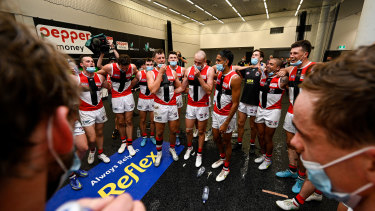 The Saints sing their famous song in the west.Credit:AFL Photos

Then King and Higgins made game-breaking bursts. King had been unsighted in the first half, but Hill jammed the ball down his throat for the first of three in five minutes. Higgins – superb with his defensive pressure as much as his attacking spark – also bobbed up with three for the term.

Hill has come in for much criticism, but he was superb for the Saints with his run and delivery, playing with purpose and a point a prove. Jack Sinclair brought terrific energy too, and Battle was a wall across half-back.

With Darcy out, the Saints took a three-goal lead into the last change. It was Darcy’s substitute Nathan O’Driscoll, in his first game, who sent the biggest shudder through the Saints camp when he goaled on the run, giving the Dockers a sniff with six minutes to play.

But the Saints dug in, and an edge in intensity saw them home. King’s fourth, from a big contested mark, sealed the result, the notoriously flaky set shot showing a new nerve in front of goal. It was a performance full of substance and maturity.

The Dockers, who were missing stalwart David Mundy to COVID protocols as well as Nat Fyfe, will want to knock over depleted crosstown rivals West Coast next week, before facing the Giants at home and then Essendon away.