Collingwood premiership player Ben Johnson has slammed the prospect of an extraordinary general meeting, saying stability at board level is vital so that informed changes can be made to the football department.

He said the current board, with Mark Korda as president, had not had the chance to put its imprint on the club after the departure of his long-standing predecessor Eddie McGuire. 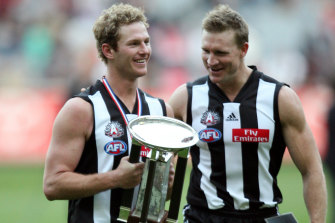 Ben Johnson with then teammate Nathan Buckley after an Anzac Day win in 2006.Credit:Pat Scala

Johnson, who played 235 games with the Magpies from 2000-2013 before retiring after Nathan Buckley’s second season as coach, is one of the first from that era to speak out about the club’s situation.

His comments came as former Brisbane champion Jonathan Brown said the Magpies, having failed to kick a goal in the first half against Geelong on Saturday, were “deplorable to watch”.

Johnson said it was “embarrassing for the footy club” that forces were gathering to challenge in a way that could only be destructive, and questioned whether those agitating for change had the best interests of the club at heart.

“[The EGM] is not needed. Obviously [with] Eddie leaving it’s going to leave a hole and there are going to be questions asked but these guys haven’t even had the chance to start before all this happened,” Johnson said. 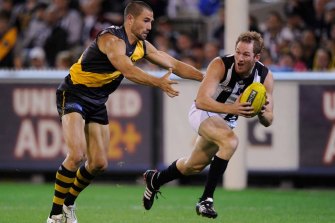 Ben Johnson during his playing days for Collingwood.Credit:Sebastian Costanzo

“I think supporters are more concerned about seeing us winning games than board elections and stability is crucial if that is to occur.”

Johnson said it was more obvious that changes were needed to the football program to get the best out of a list that was revamped in brutal fashion at the end of last season. The Pies sit 16th on the ladder with just two wins in the first 11 games.

“That is a no-brainer,” Johnson said.

“I love my footy club and I am always going to care about the club. I think they deserve a fresh set of eyes and a new voice in the football program.”

He said he was certain the environment was not conducive to players being at their best but the board knew what was required to point the club in the right direction as it considers Buckley’s future as senior coach beyond 2021.

“I am always worried about the players, first and foremost. I love my footy club and I am always going to care about the club. I think they deserve a fresh set of eyes and a new voice in the football program,” Johnson said.

“I think they can rebound pretty quickly.”

A key player in the 2010 flag, Johnson grew up a Collingwood supporter and took over the No.26 after his first season from his mentor and revered club champion Gavin Brown.

He was a teammate of director Paul Licuria for eight years; Licuria joined the board as the football director in 2018 as the Magpies began their rebound to get within minutes of winning a premiership in 2018 and then won finals in both 2019 and 2020.

The dual Copeland Trophy winner will be involved in the decision around Buckley along with recently appointed football manager Graham Wright and Magpies CEO Mark Anderson.

“I have so much confidence in him [Licuria] to do the right thing and make the right call on the coach. He is a committed Collingwood person who has given his heart and soul to the club and I question how much those initiating a coup could do better than someone as experienced in football as Licuria,” Johnson said.

“If this coup that is being speculated succeeds I am not confident [any new group] will make the right decisions about the football department.”

AFL identity and the league’s former legal counsel Jeff Browne is reportedly looking to form a ticket to challenge the board, but he is yet to publicly declare his intention. Korda has made it clear he has no intention of stepping down.

Johnson said the fact people tried to hurt McGuire’s legacy at the end of his 23-year reign as president was a disgrace and he looked forward to the day when McGuire’s contribution would be properly recognised. He said any time Collingwood people needed help McGuire was the first to lend a hand. “Some people forget that,” Johnson said.

”It was a disgrace. I understand Eddie said some things over the journey he should not have said but the overall contribution he made was enormous. He always wants what is best for the club and wants to see the team winning for the supporters. I look forward to the day he returns to the club to be recognised appropriately.”

He said the best way those wanting change could serve the club this season would be to share their concerns through appropriate forums, with three board members up for election at the annual general meeting.

“If it comes down to it these guys need to sit down over a beer and sort out what’s best for the football club because it is not about them, it’s about the supporters,” Johnson said.

The threat of an EGM remains after member David Hatley gathered more than enough signatures for an EGM to occur. Hatley met with Korda last Friday and both parties described the meeting as productive. Hatley does not want to sit on the board but wants members to have more of a say.

Collingwood skipper Peter Moore and Nathan Buckley’s manager Craig Kelly recently endorsed Browne as a suitable president but Browne is yet to speak publicly. Both Moore and Kelly have sons playing at the club.