In today’s AFL briefing, your daily wrap of footy news:

Check back in for updates throughout the day

Veteran player agent Peter Jess has questioned whether the threat of life-altering brain trauma is getting through to AFL players and a dual premiership player has called on the league to take action after a week in which a dangerous tackle and a bone-crunching off-the-ball collision left two players concussed.

Geelong’s Tom Stewart will front the tribunal this week after his clash with Richmond’s Dion Prestia at the MCG on Saturday, when the veteran Cat bypassed the ball to upend his opponent – an incident which has again sparked calls for a send-off rule. 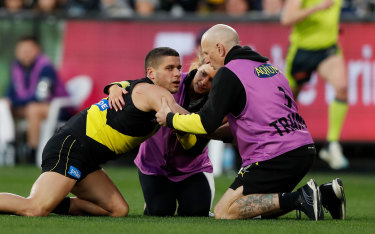 Head trauma: Dion Prestia is in concussion protocols after he was involved in an off-the-ball incident with Tom Stewart on Saturday.Credit:Getty Images

This came a week after Giants ruckman Brayden Preuss was suspended for a match for a dangerous tackle on Western Bulldog Tim English in round 14. It left the ruckman briefly motionless and may have contributed to his concussion. The Dogs say he took several hits that evening. The concussion is English’s third in as many seasons, and he remains in concussion protocols and is in doubt for Thursday night’s clash against Brisbane.

These incidents come in a year when Jess, using his own private data, says there almost certainly will be more than 100 concussions across professional and semi-professional football in Australia, including the AFL.

The AFL has strengthened its policies and education, including introducing a medical substitute last season, but recent incidents have enraged Jess, who is at the front of a potential class action should the league not introduce a brain trauma compensation fund.

“Tom Stewart showed his fellow professional footballer no respect in the nature and extent of the hit,” Jess said.

“You can be sorry after the event, but we don’t know what the long-term damage will be for Dion. The collision at that velocity is like a minor car crash. It doesn’t kill you, but it hurts you in the long term. We are pretending to make the game safe. It is simply not safe.”

Stewart’s bump was classified by the match review officer as careless (but not intentional) conduct, severe impact and high contact and was sent directly to the tribunal, meaning he faces a minimum three-match ban. But the Cats may argue it was high – not severe – impact, which under the league’s guidelines is a two-match suspension.

“We will not last as a code if this action is not stamped out,” Jess said.

Dual North Melbourne premiership player David King said excuses had too often been made for the offending player, and the tribunal needed to make a statement with Stewart.

“The line-ball ones have favoured the player who has laid the bump over the past three years. You [AFL] have taken us to this situation. Enough is enough. Either take a stand or get rid of the whole stance against head trauma. Once and for all. It’s been absolute crap to this point,” King told Fox Footy.

“What about Dion Prestia who is relying on the game to protect his safety?”

“I think three is the minimum and I think it’s likely to be three or four depending on how it comes down given the submissions of Geelong and Richmond,” Buckley said on SEN. 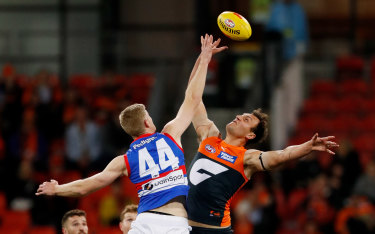 Tim English (left) remains in doubt for Thursday night’s clash against Brisbane after he was concussed against the Giants last week.Credit:Getty Images

St Kilda are pushing ahead with talks for a contract extension for coach Brett Ratten and chief operating officer Simon Lethlean is confident in Ratten’s ability to carry the struggling team forward next year. 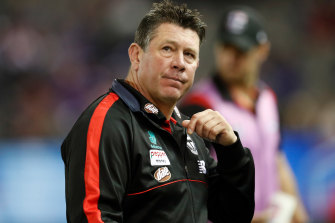 Ratten comes out of contract at the end of the season.

“We’ve taken our time with that process. We’ve been consistent I think in saying that, for where we’re at now with our program and our list, that we think ‘Ratts’ is our man.”

Lethlean said the Saints’ current poor form did not factor heavily into talks around the new contract, saying he would still engage in talks with Ratten but expected to remain relatively consistent regardless of their performance on the field.

“I doubt anyone would’ve challenged us on that a fortnight ago. Clearly that’s a debate that can now happen on the back of our form,” Lethlean said on SEN on Monday.

“But what I will say is we aren’t as reactive internally perhaps as the external footy world is, and we’ll keep progressing down the path that we said we will with Brett and his management.”

The team’s captain, Jack Steele, also expressed hope for Ratten’s return in 2023, saying the players needed to improve their form and support him as much as possible during this transition period.

“I’d love to have him on as a coach. We love Ratts, we love what he’s doing. We probably haven’t helped him out too much in that space. We’ve got to do him a bit of justice,” Steele said on Sunday.

The Saints have struggled since their mid-season bye, most recently facing a devastating loss to Sydney at the SCG on Saturday. Since losing three consecutive games, the team has dropped from fourth in the ladder down to 10th.

Lethlean also confirmed comments made by coach Ratten last week, when he said the Saints were considering Collingwood’s Jordan De Goey as a trade target alongside several other free agents. 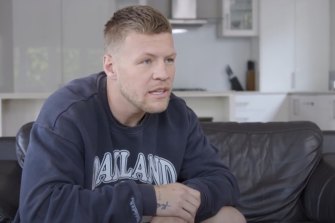 “At this time of year, I think the process for all clubs is to assess all free agents and out-of-contract players, and we’re certainly doing that below the suitability and availability of players, and Jordan is one of those,” Lethlean said.