In today’s AFL briefing, your daily wrap of football news:

Check back throughout the day for updates

Magpies big man Mason Cox has leapt to the defence of teammate and man of the moment forward Jack Ginnivan as key Collingwood figures seethe over the decision not to award the young star a free-kick for a head-high tackle on Sunday.

Cox took to social media to directly question the AFL’s handling of head-high tackles, tweeting: “Wild to think high tackles were put in the game to protect players health and now are being blatantly ignored for a 19 year old. How can we think “the AFL cares about concussions and head high contact” after this.” 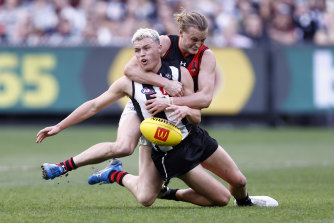 Amid claims Ginnivan has been targeted for his technique of dropping low in tackles, Collingwood president Jeff Browne has also revealed the club is seeking clarification from the AFL on a head-high free they believe should have been awarded to Ginnivan.

The Magpies have approached the AFL after Ginnivan was tackled high by Essendon’s Mason Redman at the MCG on Sunday, yet no free kick was paid despite the Magpie not dropping his body and still finding himself in a headlock.

The club’s move comes as it emerged a league crackdown in round 19 led to a season low – outside of the bye rounds – for head-high free kicks.

Ginnivan has this season been awarded the most head-high free kicks (17), two ahead of Geelong skipper Joel Selwood. But he has not received one over the past fortnight, coinciding initially with greater public debate over his tactics, and this weekend after the AFL issued a warning to all clubs, declaring any player who ducks or shrugs into tackles will not win head-high free kicks.

However, Browne said the Magpies were after greater clarification.

“I think umpiring can go for you, and against you,” Browne told 3AW. “I know the one you are referring to and it certainly stuck out in my mind. We need to clarify this with the umpires, no question about that.

“I don’t know whether it’s personal, but it’s, obviously, a directive and in that particular case it was incorrectly applied. We need to speak up about that.”

Magpies legend Tony Shaw said Ginnivan had been treated unfairly and questioned whether he had been targeted by umpires.

“I am biased but it could have been anyone. I just thought it was disgraceful how this bloke is being treated at the moment. Not just on-field but a little bit off-field at the moment,” he said.

“I think he’s been put up as the poster boy for this interpretation. I think it’s wrong.

“We know the umpires have been told the interpretation, but it seems to be this youngster has not been crucified, but he is the one they are after, and I think the club should be pretty hard on going to them and saying this is unfair. What will happen with the umpire with a decision like that? It has become personal.”

“To be honest, I thought that was a free kick. It just looked like he tackled him high. I don’t think there was any leaning into it,” McRae said.

“I am really clear with it. Umpires have come to our training … I don’t have any issues with the ruling. We’ll play within the rules. In my opinion, it was a free kick but I could be wrong.”

McRae said he hoped Ginnivan would not pay a price for his reputation.

“You hope not. The umpires are in a position to call it as they see it,” he said.

The AFL’s crackdown on players attempting to win head-high tackle free kicks led to only 62 frees paid across nine matches over the weekend, compared to a season average of 82, and a season-high 114 in round 10.

AFL umpires boss Dan Richardson last week said players being tackled had a duty of care to themselves to not put their head at risk in trying to draw a free kick, coming as the league does all it can to ease concussion issues. 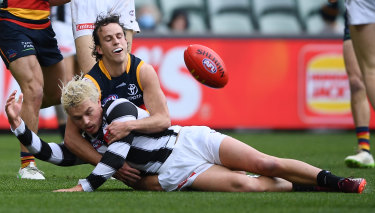 Ginnivan has been involved in a number of contentious tackles this season.Credit:Getty Images

“The health and safety of players is the primary concern of both the AFL and the clubs, and we will continue to work with clubs, their coaching panels, as well as players to ensure the safety of the game,” he said.

The AFL said the instructions to umpires are:

One of the favourite sons of Richmond’s current era, Kane Lambert, has announced his immediate retirement from football citing his ongoing hip issue and his inability to maintain his own lofty standards as the main factors. 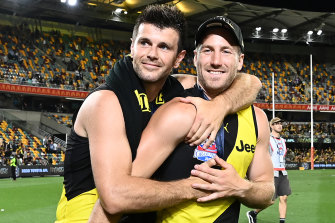 Lambert, now 30, made his debut for the Tigers in round 2, 2015 after being selected in the rookie draft.

He was 23 when he was drafted, having famously been passed up across 836 previous draft selections. 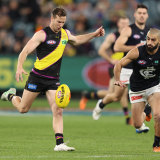 Tough and skillful – Kane Lambert has called time on his playing career.Credit:Getty Images

Lambert went on to play 135 games across nearly eight seasons for the yellow and black, winning premierships in 2017, 2019, and 2020 and being named to the All-Australian squad in 2018.

He told the Richmond website that, rather than trying to prove wrong anyone who doubted him, he aimed to prove right those who supported him.

“My purpose has been to prove people right, the people that cared for me and gave me their time and effort,” he said.

“I am so fortunate to be able to thank those people.

“It is not what you win, it is who you win it with, and it has been an absolute pleasure to share this journey with all our players, staff and members both past and present.”

The esteem in which Lambert is held at Punt Road is evidenced by him winning the peer-voted Francis Bourke Award in 2020 – presented to the player who best upholds the group’s values.

On-field, the midfielder-forward showed a real consistency in his performance. Despite missing nine games in 2021, he still finished in the top-10 in the Jack Dyer Medal voting for a fifth consecutive year.

Richmond coach Damien Hardwick paid tribute to Lambert’s playing career, telling the club website: “What Kane has given us since he arrived at the footy club can never be repaid, but it can be learned.

“Dedication, resilience and all the things we talk about needed to get the best out of yourself, this man has done it.

“The way he played the game; we changed things based around him, and how Lambert would do it. Watching him on the field is like a masterclass for an AFL coach.

“Kane has given us success, but he has also given us some of the off-field stuff that is going to last a long time.”