Adelaide star Taylor Walker says he did everything he could to help his teammates in the aftermath of the club’s 2018 pre-season camp and maintains that he had a positive experience on it.

Walker, who was captain of the team at the time of the camp, spoke for the first time publicly since the camp thrown into the spotlight after disturbing revelations from former Crows Eddie Betts, Josh Jenkins and Bryce Gibbs. 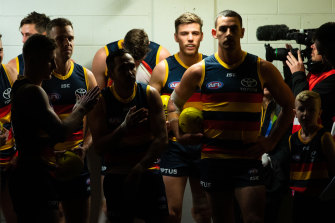 Speaking in a paid radio spot, on a show that is co-hosted by Adelaide football director and close friend Mark Ricciuto, Walker said he was holding private meetings to get to the bottom of the camp fiasco.

“I can put my head on the pillow at night, and put my hand on my heart and say that I did everything I could,” Walker told Triple M Adelaide.

“I knew something was not right post the camp, I knew blokes weren’t feeling that great about it.

“I was having one-on-one meetings, I was having some confidential meetings at my house to try and work out exactly the path to take and I can honestly say that I did everything I could to try and fix it.”

Walker’s comments come just hours after the club made another attempt to explain the situation and offered an apology to its members and fans on behalf of the chairman and the chief executive.

“But that does not take away from the feelings of hurt that those boys are going through at the moment.”

Among the accounts of some former players was that private and personal information was used against them on the camp.

In an interview with News Corp earlier this year, camp organisers claimed that all details of the camp were provided to then Adelaide CEO Andrew Fagan and the board.

Walker said the Crows were now concentrating on moving forward and creating an environment under coach Matthew Nicks that prioritises looking out for each other.

“We’re certainly doing that to the best of our ability,” Walker said.

“As footy club we still have to work through this … because sitting here you don’t like hearing that past players are feeling that way.”