There was no Brett Ratten and no Paddy Ryder but that was no problem for St Kilda, who were without their coach – a COVID protocol absentee – and their gun ruckman, who was suspended earlier this week, and were still able to cope with the challenge of a determined Gold Coast Suns.

Brendon Lade took charge of the team and oversaw what was a gritty challenge from the Queenslanders, the Saints eventually shrugging off the Suns to run out 26-point winners. 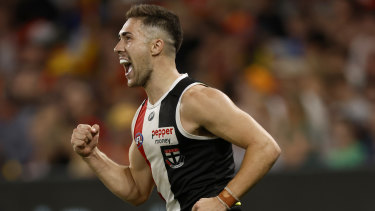 Jade Gresham had a milestone game to remember for the Saints.Credit:Getty Images

The visitors traded blows with the home side at Marvel Stadium until midway through the third quarter, at which point the Saints were able to break the shackles and establish a match-winning lead which they built on for the remainder of the match.

It was a delightful Easter Saturday afternoon as the sun shone, but the roof was closed and conditions neutral – a set-up which should have suited the Saints’ high-marking emerging star Max King.

He didn’t dominate in the way he has in recent weeks, although he played his part by kicking two goals. The main man for the victors was livewire small forward Jack Higgins, who kicked a career-high five majors.

It’s always good for your morale – not to mention your personal highlights reel – if you can mark a milestone game with a memorable moment or two.

Jade Gresham, the key St Kilda midfielder-forward, was making his 100th appearance for the Saints in this clash and he made the occasion one to remember early when he notched his first goal of the contest, a strike that highlighted his skill and quick-thinking qualities.

The 24-year-old took the ball on a tight angle and created space for himself before driving home from a tight angle. In the fourth quarter he doubled up, kicking a nice goal off the outside of his boot to seal the victory after the Suns closed to within 19 points.

Had it not been for the injuries which restricted him to just 14 games in the past two seasons, Gresham would have reached his 100 game milestone far earlier – and probably notched a lot more goals in the process.

That first goal was a welcome boost for the Saints in what had developed into an arm wrestle of a first quarter. 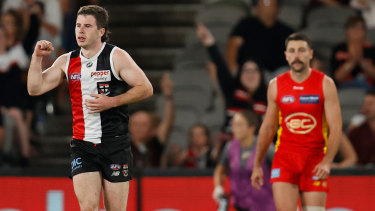 Higgins celebrates one of his five goals against the Suns.Credit:AFL Photos

Anyone who thought the in-form Saints were going to be able to impose themselves immediately on the Gold Coast got a rude awakening in the early stages as the visitors raced to a two-goal advantage through Ben Ainsworth and Izak Rankine before the Saints began to find some rhythm.

The Suns got most of their early joy by forcing turnovers inside 50 and in the midfield, while the Saints were superior from stoppages.

Higgins did much to get them going with two goals as their key forward target, Max King, was kept goalless in the early exchanges.

When you are the subject of increasing media acclamation and your team’s most potent weapon, then expectations are high. Max King has largely delivered this season with bags of four goals in each of his last three games as the Saints saw off Fremantle, Richmond and Hawthorn in successive weeks.

And he once again proved his worth to the side in the second quarter after a relatively subdued opening period. He marked and goalled inside the first minute after the resumption, and while he did miss on a couple of occasions he did notch another goal to take himself to the long break with 2.2.

His interventions were certainly necessary as the Suns belied their status as long odds outsiders by trading goals with their favoured rivals through both quarters.

Levi Casboult presented a similar target at the other end but, aside from a first quarter goal, he did not have the same impact on the scoreboard. But Mabior Chol was doing his bit for his new club, keeping the Suns in touch with a neatly finished goal on the run, his athleticism belying his 200-centimetre frame.

Higgins had a significant impact in the first quarter but he also proved to be an all-game contributor for his side, taking his tally for the match to five goals as the Saints were finally able to shake off their dogged opponents and establish a game-breaking lead in the third quarter. He topped it off close to the siren by slotting his fifth – a career-high match total.

It had been a rather dour third term with no goals for either side before Higgins notched his third eight minutes in, and then stretched the Saints’ lead further shortly after. He did so just before King showed that he is more than just a gangling high-marking forward, the big target man showing great dexterity to volley home from close range soccer-style when the ball came to him on the full.