‘He’s his own man’: SBW comes out swinging at Haas reporting

Sonny Bill Williams has slammed suggestions that he is behind the Payne Haas contract drama as the Broncos anxiously await the next flare-up in the battle to keep the game’s best front-rower.

Williams is tight with Haas but, after going through hell when he walked out on the Bulldogs 14 years ago, he wants to clear the air about his involvement. Williams still wears flak from Dogs fans, even though he has explained and apologised for what was and remains one of the most emotive moments in the game’s recent history.

It still triggers News Corp’s shouting heads, who have been getting themselves in a lather about Haas. It may be because News Corp owns the Broncos and they can’t control the narrative, despite having a pipeline to the club’s bosses.

Haas is painted as the villain by the same angry men who have no issue with Cameron Munster being given a free advertisement on Fox Sports on a daily basis as he tries to up the value of his next contract despite having 18 months to run on his Storm deal. Williams has been chased by the media since Haas let the Broncos know of his desire to leave immediately.

“I find it quite amusing that I am being painted as the person telling Payne to break his contract,” Williams said.

“I want to make it very clear. I support Payne in everything and anything he wants to do in his career decisions or in any direction he decides to go in. 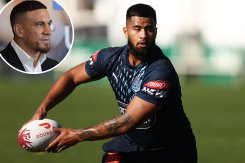 Sonny Bill Williams has come under fire because of his close links with Payne Haas.Credit:Getty

“He has a direct line to me when he wants to discuss his future, his faith and his family. Payne is my brother and I have his back and his best interests at the very front of my mind. But I have not instructed him to do anything. He’s his own man and people need to respect him for that.

“To say otherwise is an insult to him, and there is a lot more to Payne than people know. The commentary regarding Payne from certain uninformed elements of the media – and when I say uninformed, I ask, have they spoken to Payne? – is based on the interest of their paymasters. It would be nice if they formed their views after speaking to those they are talking about.

“Instead they’d rather character-assassinate someone for a few bucks.”

Haas has handled himself beautifully in Blues camp during the week. “I’ve seen a lot in my life … and experienced a lot,” he said. “This is not impacting me. I have to focus on Origin next week – if I’m not focused I’ll be exposed and I don’t want that. I want to play my part in a Blues win.”

Josh Addo-Carr’s non-selection caused plenty of drama for the NRL suits trying to sell game one of the Origin series. All the pre-game marketing material features Addo-Carr and Queensland skipper Daly Cherry-Evans. It’s surprising the marketers didn’t use the captains. James Tedesco was a sure thing to get picked. It’s a significant financial waste. The NRL says the marketing campaign was put together several weeks ago following feedback from both states regarding which stars could be featured and that there is always a risk players chosen to be in the marketing material may get injured or not be selected.

Many observers in the Blues camp this week have noticed the same thing – the protective shield around Joseph Suaalii is now well and truly down, and his sublime skill and dazzling future are now out in the open.

Suaalii has been largely hidden from the media while training at the Roosters – but having entered Brad Fittler’s Blues set-up, with the coach’s policy of near-unlimited access to players, he has been freely available for the media to talk to and observe at work. 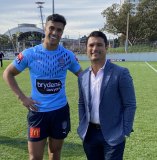 Fittler himself has been as blown away as anyone else and couldn’t hide his admiration as he watched Suaalii. During one session, as the 18-year-old pulled off another spectacular play, he turned to me and said, “The kid’s a freak”. Fittler’s laugh indicated he would be comfortable tossing Suaalii into a game – something Craig Wing says would not be a problem for the youngster.

Wing has followed Suaalii’s career from a young age. One of his mates, Steve Nasteski, has a talented son, Luca, who played with Suaalii for Souths’ juniors.

“I’ve watched his progress through the juniors to here,” said Wing, who was at the Blues’ Homebush training session on Thursday. “And I have no doubt if Freddy decided to throw him into the starting side he would handle it. He is certainly ready. He was a big kid coming through the grades but he had the skill and a certain calmness … you could always see he was going to be something very special and I’m certain while this level would be a challenge for him – especially at the start – he would get in the flow of the game and he would do really well.”

Suaalii said he was in awe of his Blues teammates, but is confident in his ability. He has shown a tough side to his game. “I like the contact,” he said. “My dad got me ready for that. He’d get the tackle bags out in the backyard and be really physical with me. I’d end up in tears but it got me ready for what I’m doing today.”

Appointing the State of Origin coaches as Australian selectors – with Peter V’landys as chair of the selection panel – sounds good at first, but scratch the surface and some big questions arise.
For instance, is Brad Fittler or Billy Slater really going to choose a player from their opponents’ team over one of their own? Say they pick an extended team in the middle of the Origin series. Imagine if Billy chooses Nathan Cleary over Daly Cherry-Evans. Why do we then need the chairman to have a casting vote if Slater, Fittler and Mal Meninga are in the selection room? Shouldn’t it be the case that a casting vote is never needed? If Fittler and Slater stay loyal to their own players and select according to state lines, does that mean Meninga effectively picks the side – or is that now V’landys?

The latest Tooheys New cans will feature some classic Origin moments on them. We see Freddy with his hand in the air in his final game scoring a try, but our favourite is the image of Benny Elias with his mum after he cut his head open and she ran on to the field to be by his side.

It was the Ray Warren retirement announcement that was planned to perfection – but in the final moments, much to everyone’s shock, it didn’t take place.

In the background of the 2021 finals series, a media plan was in place for “Rabbits” to announce he was about to call his last few games. Key figures at Nine, including host James Bracey and Phil Gould, were aware of what Rabs was going to say. I had a tweet and story ready to run online once he said it, and I was told when it was going to happen.

But when it came to the moment, Rabbits just didn’t make the announcement. He simply played on and called the finals series, including the grand final. Even in the lead-up to his final decision to step back from calling, it was a huge struggle. It was a decision he wrestled with for a few years. In the end, no matter how he made it and announced it, it was definitely the right one.

I had the privilege of working with Warren at Nine and in radio. He’s the best caller I’ve heard and we should be grateful he was around for as long as he was.

Not content with playing a coaching role this year, Cam Smith will also be making his debut in the Origin commentary box alongside Matt Thompson. Andrew Johns will join him behind the mic and he will be a valuable guide for Smith. Nine will also have an all-star panel headed by Phil Gould and Paul Vautin on the night. Smith is excited to be providing his match insight.

“It’s an honour to be given the nod to call the game for Channel Nine,” he said. “As a player, there was nothing bigger than Origin. Rabs, Fatty, Gus and Sterlo have all paved the way and their voices are etched in history for all the greatest moments in Origin.

“Some of my fondest memories of playing in those big games have their voices attached to them. I’m grateful to have the opportunity now to follow in their footsteps. It’s shaping up to be a memorable series and I can’t wait to cover it from the commentary box alongside Mat Thompson and Joey.”

Greg Inglis’ Goanna Academy is the first Indigenous-owned and accredited mental health organisation in Australia and is committed to reducing the stigma associated with mental health by building social capacity through education programs, story sharing and community engagement.

They are staging a night on Friday to support the extraordinary work that the Goanna Academy has made in committing to assist everyday Australians and young people who suffer in silence.
Outside the event, they are running a wider fundraising drive with the general community and the “Goanna Family” to help them get to the places their services are needed most. You can donate at Gofundme.com.