From the Archives, 2004: Hird shines as Bombers slip by Eagles

If there was a truism to be found in the events that preoccupied Essendon in the past week, it was that James Hird is not easily kept quiet. 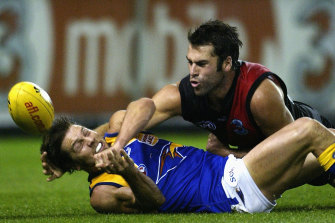 By the Bomber captain’s standards – those he sets weekly on the field, not those he chose to put forward on The Footy Show – he offered little more than a peep for most of last night’s captivating affair. As classy as they were, his 10 touches to half-time were not as numerous or as influential as those of his midfield colleagues Damien Peverill and Dean Solomon, whose dominance had sent the Bombers to a 48-0 lead after just 19 minutes.

Hird, on reflection, might have chosen his moment more carefully on Wednesday, but he could not have done so last night.

West Coast, through the dominant leg speed of its previously beaten midfield, dragged the contest back in the second and third quarters so that it became a white-knuckle, goal-for-goal treat in the final term. 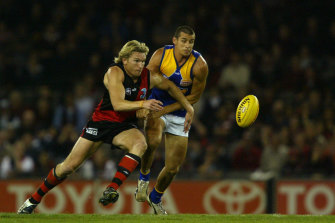 Forward Andrew McDougall, playing just his third AFL game, had put the Eagles a goal in front with eight minutes to play when it became clear that Hird was not about to let events slip by without his intervention. Having surged forward, he took a low mark on a lead and kicked truly from 45 metres on a 45-degree angle to level the scores. It would be the first of three occasions in the remaining minutes when the score would be locked. Such was the evenness of the rhythm with which the pendulum swung, it seemed inevitable that it would take a special moment to decide the matter.

Enter the most special player on the field.

With 35 seconds remaining, Hird swooped on a loose ball in the right forward pocket and snapped for goal and broke the deadlock. His celebration was a little less circumspect than his brief public appearances on Thursday morning. His goal was the last of 15 touches for the quarter. 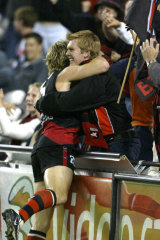 James Hird rushes to his supporters after he scores the winning goal.Credit:John French

Aside from the obvious fact that Essendon finished with four points, there was much about the Bombers that had changed in the week since they last appeared at this venue, and the differences were as immediately obvious as a nose job.

For a start, David Hille was played as a ruckman and Matthew Lloyd played as full-forward. Both men were enormously influential. Hille dominated the stoppages to such a point that Matthew Allan, who had been preferred last week, barely left the bench. He had a midfield maligned as stodgy running like thoroughbreds in the first quarter, when the Bombers kicked eight straight goals to none in a surge that set up victory.

But it was Lloyd who revelled most in familiar territory, and made sure the funding of his successful tribunal appeals hearing on Thursday was a worthy investment.

But it was his three goals in the third quarter that were most critical, keeping Essendon in the match as the Eagles counterpunched with renewed and dangerous vigour. His goal in the final term, after a mighty pack mark, levelled the scores for Hird to seal the victory. 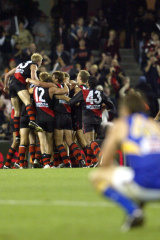 But for that final moment, this more exciting of matches could have gone either way, and a win to the Eagles would have been particularly worthy given they lost key big man Michael Gardiner midway through the first quarter with what appeared to be an aggravation of his posterior cruciate problem. When Dean Cox, who had shouldered the ruck duties almost unrelieved as a result, was forced off limping in the final quarter, it might easily have nullified one of the game’s most damaging midfields. But Daniel Kerr, Ben Cousins, Chad Fletcher and Chris Judd are too classy to be stopped entirely, and might have swayed the ledger had the Eagles had a target up forward.

But the symbolism of the bizarre match-up of Dustin Fletcher on Phil Matera – a good big man on a good little man – perhaps said just enough.

8 Essendon had managed only eight goals in each of its first two games of the season, but in a flying start at Telstra Dome last night, the Bombers banged on eight unanswered goals in the first 20 minutes. But the Eagles made sure that Essendon would not run completely out of control, and ground their way back to make it a thriller.

With the roof closed and the ground in good condition, it was a goal-fest at Telstra Dome last night. In particular, the third quarter ran for more than 35 minutes as 14 goals were kicked.

Eagle defender Trent Carroll was left hurting midway through the third term when he gave away a 50-metre penalty to Matthew Lloyd for encroaching on the mark, when he was matching the movements of Lloyd who was stealthily moving sideways to improve his angle in front of goal.

Essendon will take on old rival Carlton at the MCG on Friday night, while West Coast will head back to the comforts of Subiaco Oval to prepare for reigning premiers, the Brisbane Lions.

Kevin Sheedy (Essendon): “I think there was just a fair amount of energy that wanted to be released around the club, it was like an explosion . . . You’d have to say they played a very controlled, aggressive, impact game of footy tonight.”

John Worsfold (West Coast): “I gave it a little bit of thought after the game, that would have been a great game to watch. Most people would rate it a great game, bar those directly involved with the Eagles.” — Melissa Ryan