The NRL has officially handed its 17th licence to the Redcliffe-based Dolphins, who pipped the Jets and Firehawks for inclusion in an expanded competition.

The Australian Rugby League Commission met on Wednesday morning to sign off on the decision, which will result in the Dolphins becoming the first team added to the league since the Gold Coast Titans were introduced in 2007. The announcement was made in time for the Dolphins to become a major player in the transfer market as a slew of free agents prepare to test their value from November 1.

The prospective new franchises had to prove that they could immediately stand on their own from the outset without the financial support the AFL gave to its expansion clubs. The Dolphins satisfied a number of criteria, including being able to produce a bank cheque of $50 million over the course of the next five years to prove they were sustainable. They also demonstrated they could increase interest and participation in rugby league without adversely affecting the Broncos, Cowboys or Titans.

Their catchment area – which runs from northern Brisbane, through Moreton Bay and linking to the Sunshine Coast – has more than 10,000 registered junior players. The Dolphins junior club alone has 50 teams and 800 registered players in an area that is predicted to further expand.

Foxtel was prepared to commit a further $100 million over the next five years for another Queensland side. That offsets the predicted $75 million cost for the NRL to fund the new team, enough to placate the existing clubs.

Wayne Bennett, having completed his stint with South Sydney and indicated he is moving back to Queensland, is expected to be the inaugural Dolphins coach. One of his first tasks is to compile a squad that will be competitive from the moment it joins the competition in 2023. Players yet to commit to their existing clubs for that season include Cody Walker, Joseph Manu, Dylan Brown, Viliame Kikau, Clint Gutherson, Brandon Smith, Kalyn Ponga, Reed Mahoney, Anthony Milford and Dylan Edwards. 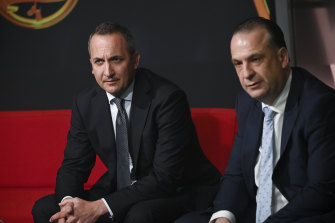 Andrew Abdo and Peter V’landys have confirmed the Dolphins will join the competition.Credit:NRL Photos

The expanded 17-team competition will see the NRL Telstra Premiership become a 26-round competition with every team continuing to play 24 games. All teams will receive two byes during the season with the total number of regular season games increasing from 192 to 204.

ARLC chairman Peter V’landys said the Commission’s decision was a landmark moment in the game’s history.

“Today is an exciting moment in the history of our game. The NRL Telstra Premiership will expand to 17 teams in 2023 and on behalf of the Commission I would like to congratulate the Dolphins on being granted the 17th licence,” V’landys said.

“I would also like to acknowledge and thank the other bid teams for the work they put into their submissions. All three bids were of the highest calibre and highlight the strength of rugby league in Queensland.”

V’landys said expanding the game in Queensland was vital to the long-term growth of the sport.

“Rugby league is part of Queensland’s DNA and to have four teams based in Queensland will further strengthen our game as the No.1 sport in the state,” he said.

V’landys said the commission approved the expanded competition because it added value to the competition.

“Our priority as a commission was firstly to ensure all 16 clubs came through the pandemic financially secure and we have achieved that.

“This decision adds substantial value to the game which will benefit all existing clubs. I would like to acknowledge our broadcast partner Fox Sports who have agreed to an enhanced broadcast agreement from 2023 to 2027.”

“This is an exciting day for our game. There will be more opportunities for our players in 2023, more games of rugby league to watch for our fans and more investment in pathways for our grassroots participants,” Abdo said.

“It’s also an excellent outcome for our partners and sponsors who have additional exposure from 2023.

“The structure of the season means there will be 12 more games played every year and all clubs will receive two byes, which assists the workload management of our players.”