Dockers upset Cats at home to stamp themselves as genuine contenders

Fremantle have stamped themselves as genuine premiership contenders after overcoming a slow start to pick Geelong apart on their home ground then hang on to win by just three points.

Such was their defensive pressure they restricted Geelong to just nine scoring shots in the first three quarters – the club’s lowest tally at Kardinia Park since 1964. 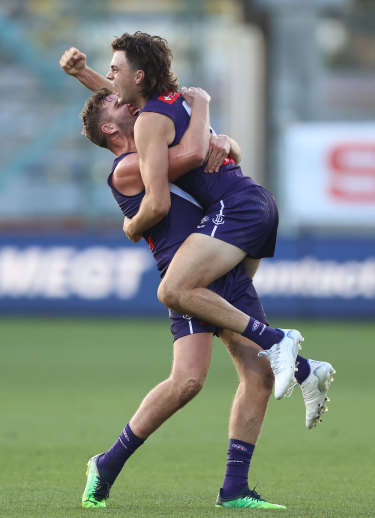 Heave-ho: It was a defining win for Fremantle.Credit:Getty Images

They then resisted a typical Geelong comeback, kicking two important goals in the final quarter, to hold on when the Cats kicked a goal to draw within three points with just 26 seconds remaining.

They did so without ruckman Sean Darcy, key forward Matt Taberner and dual Brownlow medallist Nat Fyfe yet to play in 2022.

Fremantle’s youngsters Andrew Brayshaw and Caleb Serong were excellent in tight while Blake Acres controlled his wing and Jordan Clark impressed in his first game back in Geelong since he left after being starved of opportunities.

The Cats looked good when they moved the ball through the corridor after a turnover with their smalls linking to push the ball inside a spacious 50.

However the Dockers stayed in touch as they made the most of their forward thrusts, cashing in on Geelong’s weakness in defence to score more often than not when they entered their forward 50. A defensive breakdown at a stoppage allowed Lachie Schultz to goal for the Dockers to keep the margin minimal at the first break.

It allowed the Dockers to reassess at quarter time and shore up their defence with an extra number stifling the influence of Hawkins and Jeremy Cameron. Fremantle’s tackling has improved, and they began winning the ball back more often and outworking the Cats into space.

The Cats’ cause wasn’t helped when key linkman Max Holmes was subbed out of the game robbing Geelong of transition run which tipped the scales in the Dockers’ favour.

After conceding six of the first seven inside 50s of the quarter, the Dockers went to work spreading harder than Geelong, unafraid to use the narrow wings to move the ball.

Unfortunately, from their perspective they could not convert only scoring level at half-time after dominating field position in the second quarter. But Darcy Tucker started the second half with a stoppage goal that redressed the inefficiency that had defined the second quarter and they opened up a three goal lead that the Cats could not overcome.

The Dockers are now 6-1 after seven rounds with a top four spot beckoning while Geelong head to Canberra to play the GWS Giants with a worrying 4-3 scoreline with their win over Brisbane their only meritorious victory.

The Cats’ star said he was set to return against the Giants after missing the previous two matches with a corked calf with Dangerfield telling the president’s function he expected to be fit for the important encounter. Ruckman Rhys Stanley appeared to hurt his ankle in the dying minutes.

And to editorialise for all a moment, telling a crowd to make some noise at a boundary throw in six minutes into the third quarter when the Cats have not scored a goal for more than a quarter is not right. Geelong are the second oldest club in the game’s history and their fans provide a unique atmosphere at their home ground. They do not need to be told how to act at the football nor turned into an American environment on the surf coast. People are all for innovation but not useless copy cat ideas.