It may be third against 17th on the table but North Melbourne’s hopes of a major upset have lifted after Fremantle revealed six players are in health-and-safety protocols.

It’s a major blow for the Dockers, who are appearing in their first Friday-night clash since round 17, 2016, giving the Kangaroos, struggling with a 1-6 win-loss record and $7.50 outsiders, greater hope of an upset victory.

This is the largest amount of players the in-form Dockers have lost to the pandemic this season, coming as a surge in cases in Western Australia peaked at a daily tally of 9782 on Wednesday.

The West Coast Eagles have been decimated through the season by the pandemic, and it’s now the Dockers’ turn, coming just after they claimed a significant win against Geelong on the road and have emerged as a serious premiership threat.

“We’ve got six out. We’re pretty confident that it will be all we’ve got out,” Longmuir said.

“It’s a challenge, but it’s an exciting one and it creates opportunities for other players.” 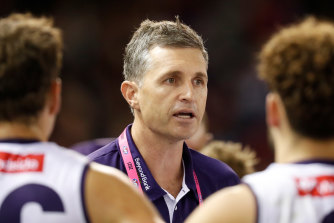 Acres has had a stand-out season, the hard-running former Saint averaging 22 touches per game and having, according to Saints’ great Nick Riewoldt, “found his feet at this level”. Lobb has also been important up forward, booting an equal team high of 12 goals. Frederick and Colyer had played in all seven matches.

Hayden Young, Heath Chapman, Sean Darcy and Bailey Banfield are likely to return, while Jye Amiss, the young forward taken with pick No.8 in last year’s national draft, will debut.

Longmuir said the Dockers may need to tighten protocols when on interstate trips.

“After a good win you tend to get a bit more touchy-feely and closer and sing the song together. Then we sat on a bus for an hour, sat on a plane for four hours, and then sat on another bus back to the club for 40 minutes. It could have happened in that time,” he said.

“Definitely, (away games) are a riskier time. That’s something we’re going to have to look at down the track.”

The Kangaroos, after a spiteful loss to Carlton, will be without suspended key forward Nick Larkey.

No.1 draft pick Jason Horne-Francis, who flew the flag against Jack Silvagni last weekend and is quickly emerging as a leader, has said his side will embrace the long trip, a declaration coach David Noble echoed.

“We’ve drawn a lot from our experiences against the top teams we’ve played so far. Even [in] the Brisbane game we learned a lot about ourselves,” Noble said.

“Sydney, we did really well there, even the Blues. It’s the manner in how you want to set your game up, how you go about it, what you’re looking for and how you feel you can win the game. Then it’s about what you learn and how you adjust as you go.

“We look forward and embrace the challenge of playing the top teams … you learn a lot about yourself really quickly.”

There has been chat among supporters whether the Kangaroos should pursue a priority pick, having been the worst team in the competition since 2020, but Noble said he was not involved in any club discussions.

“I think it’s a fair enough discussion from a media perspective but we try not to get too caught up in it … we’ve got a strong understanding and a strong faith in what we’re doing internally,” he said.

“You have to be careful about what outside noise is about and what that causes internally … I don’t have too much of an issue with it but for us internally, we’re not having that conversation.