Queensland are set to benefit with two home games if the State of Origin opener in Melbourne next week is moved, with Townsville likely to be the new venue.

The NRL are monitoring the COVID-19 outbreak in Melbourne and will make a call as early as Saturday about whether to push ahead with the June 9 series opener at the MCG. 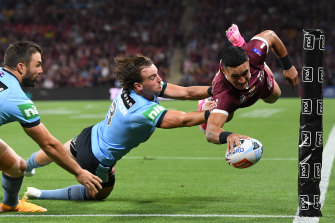 “For the good of the economy it would be better in Townsville. They’ve built a brand new stadium up there, they have had some tough times, their tourism has been impacted – I think it’s a no-brainer to have it there,” Hatcher said.

“It would also be fantastic for the people. Not too many people appreciate how far fans travel to those Cowboys games and other league events. Some of them will do up to 800km in round-trips on a weekend.

“The Queensland Government are well and truly behind it. Touch wood it happens.

“I’m certainly not fazed by Canberra. The only good thing about Canberra is it keeps the politicians away from the rest of us.

“And why would NSW resist Townsville? They resist everything else. Weren’t they starting their dynasty last year? They couldn’t win the series.”

“If you’re good enough you will play the game wherever.

“NSW have done well at the worst stadium in Australia [Stadium Australia]. But these are now exceptional times, and I don’t see a disproportionate advantage one way or another if it was Townsville or even Newcastle.”

NSWRL boss Dave Trodden, however, hit back at Hatcher’s dream of playing the opener in the tropics.

“As far as we’re concerned there will be a game on Wednesday week, and wherever it is, we’ll be there and ready for Queensland. But I am a bit confused by the Queenslanders wanting the game in Townsville because they’ve spent the past 18 months trying to keep people out of their state – now they want everyone to go there.”

Queensland politicians certainly did their best to sell the Townsville dream to the NRL, with Deputy Premier Steven Miles declaring “the most sensible place to move the game to is Townsville”.

And the state’s health minister Yvette D’Ath told reporters: “Where else would you want to play State of Origin? We have handled COVID so well in this state.

“The southerners are voting with their feet, we’ve got so many NSW and Victorians moving to Queensland, they know this is the best state to be in.”