You don’t need a conference system to celebrate derbies like this.

Parramatta and Canterbury is a rivalry best served when both sides are peaking. This is not currently the case. They may one day end up in the same conference, but right now they are not in the same league. 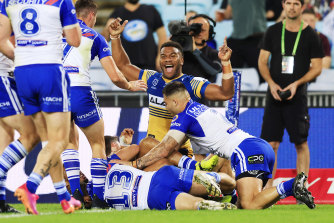 Maika Sivo celebrates one of his two tries.Credit:Getty

This was another example of the gulf in class between the top and bottom teams. While Melbourne are chasing back-to-back titles, Canterbury haven’t posted back-to-back wins since August 2019. Both feats appear equally plausible on current form.

Parramatta were well below their best but still left Stadium Australia with a comprehensive 32-10 win. The blue and golds have won as many games as the Dogs have lost this season. Both teams finished without their full complement. Nathan Brown suffered a hip-pointer injury, with his lay-off time likely to be weeks rather months. Dylan Napa’s night also finished early due to a shoulder injury.

Clint Gutherson was again the hero, scoring two tries, having a hand in others and earning himself an early mark. However, he didn’t do it all on his own.

Reed Mahoney has long been the least heralded member of the Parramatta spine. The fullback is known as ‘The King’, the halfback is negotiating a healthy pay rise, and the pivot has been dubbed one of the next big things. 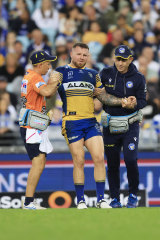 Nathan Brown walks off with an injury.Credit:Getty

No longer content to be just the drummer in the band, Mahoney is unafraid to occasionally grab the microphone. He may not be the frontman, but his contribution to the quartet is greater than ever before. There has not been a more improved player in 2021.

It took just four minutes for the head-geared hooker to underline his value to Brad Arthur’s side. From Parramatta’s opening defensive set, Mahoney charged down a Kyle Flanagan kick to earn quality field position.

A few moments later, he was charging through the ruck, spinning through tackles and putting his skipper into open space. The suspension to Latrell Mitchell means Mahoney is very much in the running in what is shaping as the most open Dally M race in years.

Canterbury’s first win of the season was a long time coming, but already seems a distant memory. Since beating Cronulla, the Bulldogs faithful have had precious little to cheer about. Not once in the first half did they have a single play-the-ball in the opposition quarter. The only highlight was when Ava Seumanufagai folded counterpart Shaun Lane with one of the tackles of the year.

Their fortunes improved in the second half. When Jake Averillo scored a terrific solo try and then Dallin Watene-Zelezniak finished off a slick back-line movement, the underdogs got within two converted tries. But that was as close as it got.

There is never a good time to suffer an injury, but for Nathan Brown it couldn’t have been worse. Brown is in form but off contract. The back-rower is also a Blues incumbent with State of Origin just weeks away.

When Brown went down, without another player in the vicinity, it was immediately apparent the injury was a painful one. The stretcher was called but the 28-year-old insisted on making his own way off. What this means to his contract negotiations, which have been going on for the best part of the year, is anyone’s guess.

On this occasion, Parramatta did just enough. Friday night’s blockbuster clash with the Roosters will give them a better indication of where they are at. Canterbury, meanwhile, continued their build up for next year with the signature of Brent Naden. There isn’t as much to look forward to for the rest of this season.