Bulldog through and through: ‘The Bont’ extends Whitten Oval stay

Western Bulldogs skipper Marcus Bontempelli has declared there is “magic in the air” at Whitten Oval after re-signing with the club until the end of 2025.

The three-time best and fairest and three-time All-Australian was best on ground against St Kilda last Saturday night and is rated alongside Richmond’s Dustin Martin as the best player in the game, having played a key role in helping the Bulldogs to their drought-breaking premiership in 2016. 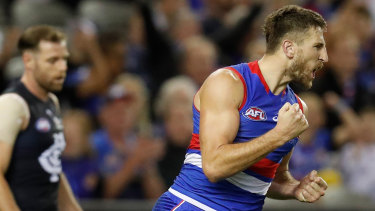 One of the game’s most respected players, “The Bont” had never shown any intention of leaving but negotiations between the club and Bontempelli’s manager, Tom Petroro from TLA, continued throughout the first part of the season to arrive at a deal that suited both player and club.

Bontempelli, who became captain in 2020, will be a key player in the top-of-the-table clash with Melbourne at Marvel Stadium on Friday night, with both clubs entering round 11 with nine wins and one loss.

“It is an exciting time,” Bontempelli said.

“The thing that makes great teams great is their willingness to play for the team, play their role, do the challenging and difficult things – and then hopefully we all succeed together.

“There’s talent within the group, which is I think somewhat clear.

“But the appetite to make the most of it and not rely on it has been a key focus for us. It’s probably seen us make a bit of a shift and a jump this year from last season.

“There’s definitely an excitement and hopefully a little bit of magic in the air for us to continue to explore.”

Bontempelli’s signature will enable the club to progress talks with in-form midfielder Tom Liberatore, who is a key extractor in the Bulldogs’ star-studded midfield.

Bontempelli’s four-year deal goes against the trend of recent star players who have signed six and seven-year deals, with the Bulldogs’ skipper to turn 29 when he next comes out of contract.