Essendon has launched a review of its football department less than a month after president Paul Brasher said the board had satisfied itself no such review was needed. It will focus on player development, coaching and recruitment.

In a mid-season message to members on Monday night, Brasher announced football director Sean Wellman would lead the review, with the support of club legends Kevin Sheedy and Simon Madden. 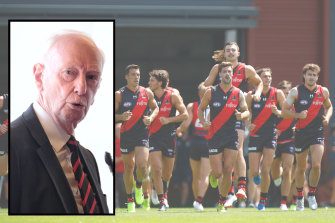 “The actions that come out of this review are likely to be incremental in terms of additional resources, rather than transformational,” Brasher said.

Brasher said the review would prioritise finding ways to better support Essendon coach Ben Rutten and the current coaching panel, with recruitment also to be a focus, given the Bombers will likely receive a high draft pick this year.

“It’s always important, but this year we are likely to have reasonably high draft picks, room in our salary cap and the ability to go into a period of trade, free agency and drafting with a real head of steam,” Brasher said.

Essendon currently sits third-last on the ladder with just two wins midway through the season after making finals last year.

On May 7, Brasher said the club would not bow to pressure and conduct a review during Rutten’s second official season as coach, reminding those at a function prior to the Bombers’ win over Hawthorn the coach had taken a young team to the finals in his first season after succeeding John Worsfold as coach.

“We are not doing a review, but we are constantly examining and challenging every aspect of our football program, being brutally honest about where we are falling short and looking for ways to improve, not just in the short term, but as a basis for the team we are building,” Brasher said at the time.

Brasher also revealed at that function that Rutten and football manager Josh Mahoney had been grilled at a board meeting held the previous week about the football program and the team’s performance in the opening seven rounds.

The Bombers president on Monday said he shared the frustrations of fans after a difficult start to the year, telling supporters that effort was the minimum and “we don’t want honourable losses”.

However, Brasher said expectations may have been unduly raised after the club made finals last season when they “probably didn’t expect to”.

“The reality is in most things, it’s never quite as good or quite as bad as you might think, and that has certainly applied to this team,” Brasher said.

“I said at the start of the year that this playing group was a work in progress, and that progress might not be linear, and that clearly is still the case.”

Brasher also apologised for not announcing the re-signing of Essendon CEO Xavier Campbell for a further two years and said Campbell had the full support of the board.

“The board unanimously agreed to extend Xavier’s contract because we believe he is the best person to provide the stability that we need and to lead us through this next stage of our five-year strategic plan, which includes football success,” Brasher said.

“If clubs change their CEO whenever they were going through a particular disappointing period of weeks or even months within a season, you would see a very high turnover of CEOs in league ranks.”