Billy the man: Slater back to haunt Blues in epic Origin upset

With each passing day, the whispers south of the Tweed this past week have grown to a quiet roar: the bloke now coaching Queensland is pretty damn good at a caper he’d never tried before.

Billy Slater is nothing like the vision a New South Welshman has of a Queenslander. He’s intelligent, articulate, clean cut.

But he still lives in Melbourne, so that makes him eminently qualified for his current role.

And just like the lost decade, the one when every man who wore blue was like a Washington General, the kid who produced State of Origin’s most famous chip-and-chase try is now back – as a man to taunt NSW as a coach.

This was Origin as Slater knew it, and how every NSW fan wished they never knew it, as the Maroons won in Sydney for the first time since when Slater was a player in 2017 with a famous 16-10 victory after Isaah Yeo was dragged down inches from the line on the last play of the night.

Slater only needs one more win – in either game two in Perth or back home in Brisbane in the series finale – and the greatest coaching introduction in Origin history might just be complete. 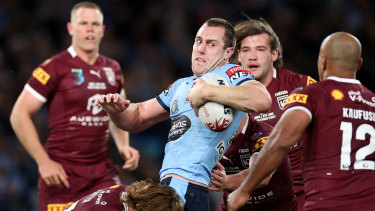 One of Slater’s best mates, Cameron Smith, was laughing in the commentary box. The other, Johnathan Thurston, was having so much fun relaying messages on the sideline he even threw a paper aeroplane back into the crowd.

At one stage, his team looked like they were going to play with just two reserves for the final 26 minutes when teenage rookie Jeremiah Nanai left the field in agony with an ankle injury.

Slater had Queensland exactly where he wanted them – and then Nanai miraculously reappeared shortly thereafter.

Inspired by the selection of four Origin debutants and memorable performances from Patrick Carrigan and Reuben Cotter, the Maroons suffocated a disjointed NSW, who now face the Herculean task of saving the series across the Nullarbor. 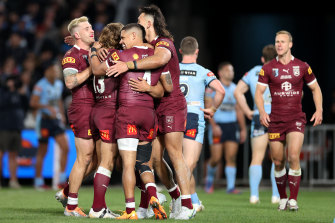 Slater’s star man, Cameron Munster, looks like Justin Bieber these days with his mop of bleached blond hair. He casually jogged out last onto his sport’s biggest stage before kick-off and then, at a moment when the crowd was waiting for the main act, seared his way through a NSW defence early in the second half.

His team scored off the next play through captain Daly Cherry-Evans’ scrum move, and Slater was back in a position he – and Queensland – know all too well.

Brad Fittler, on the other hand, did Brad Fittler things in the lead-up to game one.

He left out Josh Addo-Carr, bamboozling most of the state, and the NRL’s entire marketing department, who had dozens of flags made up of the winger flying outside Accor Stadium on game night. He chose a regular five-eighth in Jack Wighton at centre, and chose on the bench a rookie centre in Stephen Crichton to cover a number of positions … and put him on to play centre for the hampered Kotoni Staggs (shoulder). 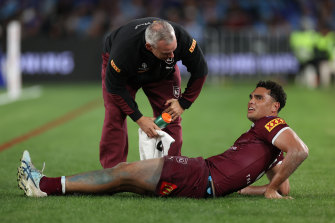 Slater lost Xavier Coates in the first half on Wednesday before Jeremiah Nanai was also forced off for a time.Credit:Getty

Yet for Freddy, things just seem to work.

Naturally, Wighton scored the first try. He burst through a little bit of space on the left, set up by Penrith teammates Nathan Cleary and Jarome Luai to his inside.

Another Panther, Isaah Yeo, was lucky to stay on the field after the opening hit-up, when he fell awkwardly under Josh Papalii’s charge.

But crucially, he appeared to stumble after getting to his feet, enough for him to be immediately ruled out of the rest of the game.

The NRL employed an independent doctor in a remote bunker for the first time in Origin, and Yeo was cleared to stay on the field.

Queensland lost Xavier Coates with a syndesmosis injury midway through the first half, but the other starting winger, 20-year-old rookie Selwyn Cobbo, was the magician for the Maroons’ response.

Cobbo plays with innocence of a kid in a Cherbourg schoolyard, which of course he was a couple of years ago. And when a bouncing ball came his way, he sprinted, kicked off his non-dominant right foot, allowing Dane Gagai to score and Valentine Holmes to give the Maroons an unlikely 6-4 half-time lead, but only after Junior Paulo had a try chalked off for obstruction from Cameron Murray.

Cherry-Evans’ try padded the lead to eight points, and it only prompted Fittler to send on Crichton, who was almost instantly placed on report for a lifting tackle on Munster.

Kalyn Ponga set up the outstanding Holmes, shifted to the wing in lieu of Coates, for breathing space, only for Cameron Murray to haul the Blues back within six with eight minutes left.

But this is Origin, and Slater is back involved.

It only ends one way.