It’s only a small sample size, but alarm bells are already starting to ring for Essendon regarding their defence this season.

Granted, they’ve already played three teams who are expected to make finals this year, if not the top four. But last Sunday they leaked 99 points to fellow 1-3 side Adelaide, who finished bottom four last year. After four rounds in 2022, the Bombers’ defence ranks dead last. 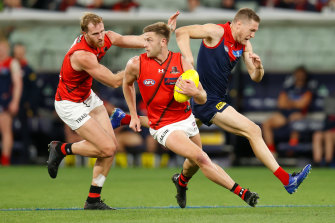 The cobbled-together Essendon defence helped the team to a finals berth in 2021 but is struggling in 2022.Credit:AFL Photos

In their four games so far, Essendon have conceded an average of 108 points, and caretaker coach Blake Caracella admitted last week after their narrow win against Adelaide that the team is suffering from a “connection issue”.

“We certainly don’t want to allow teams to kick 100 points a game, that’s not sustainable at all,” he said.

“We’re doing what we can to work on that.”

“We’re continually working and talking about the defensive part of our game, how we can continue to defend better, more consistently,” Rutten said.

“There’s some really good parts of our game with our defence and our way we move the ball, there’s some other times where it wasn’t so good and it hurts us on the scoreboard, so we’re continuing to refine that.”

Not all of that falls solely at the feet of the Bombers’ back line. Having key midfielders Jake Stringer, Zach Merrett and Kyle Langford playing a combined five games from a possible 12 has left their defence exposed with less protection coming from the middle of the ground.

But even taking that into consideration, there are plenty of concerning signs for Essendon in their defensive 50.

The Bombers’ makeshift defence did a commendable job of holding things together last year.

In their first year together as a defensive unit, the cobbled-together and dramatically renovated back line featuring former forwards James Stewart and Jayden Laverde, recruit Nick Hind, skipper Dyson Heppell, Mason Redman and breakout star Jordan Ridley was responsible for ensuring the Bombers’ defence ranked a respectable ninth in the league.

Their collective efforts also helped them grab a surprise finals berth when they were widely tipped to finish bottom four before the season began. 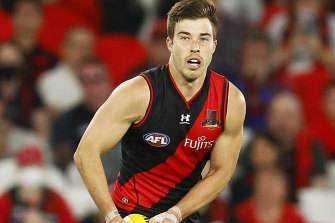 Essendon’s midfield is missing stars such as Zach Merrett.Credit:Getty Images

But after holding things together reasonably well in 2021, cracks are starting to appear this year.

Laverde and Stewart haven’t been as effective in nullifying opposition key forwards, Hind and Redman, despite returning to form against the Crows, have made slow starts to the year and are well below their career-best 2021 output, while Heppell looks to be in decline as he enters the twilight of his career.

Although he was used forward in his solitary game this year, Aaron Francis’ continued battle to remain fit exacerbates Essendon’s fragility down back, as does the lack of any meaningful emerging talent in that part of the ground.

Brandon Zerk-Thatcher cannot get any continuity in his game, either, having managed just 18 matches in five years, and when he got his chance back in the senior team against Adelaide last week, he looked decidedly shaky. Two errors deep in defence led directly to goals to the Crows which could have easily cost Essendon victory in such a tight game.

High hopes have been pinned on 2020 top 10 pick Zach Reid, but after an injury-interrupted start to his fledgling career – he has only played one game – he’s just started stringing games together again at VFL level in the last couple of weeks.

The prolonged absence of two-time All-Australian Michael Hurley hasn’t helped matters either, and while Cale Hooker spent the end of his career up forward, his retirement, as well as Patrick Ambrose’s, have left big holes that the Bombers have struggled to fill.

It’s not all doom and gloom for Essendon down back. Jake Kelly is already proving to be a good pick-up, but he and his defensive counterparts are going to have to bring their A-game on Sunday if they intend to quell a Fremantle side that features aerial threats in attack such as Matt Taberner and Rory Lobb.

Taberner and Lobb combined for 5 goal 5 behinds last time they met, when the Bombers narrowly won by seven points at Marvel Stadium. Taberner, in particular, dominated but kicked 4.3 and if he had kicked straighter, the result probably would’ve been different.

So Essendon are fully aware of the challenge that awaits them on Sunday. Whether they are up to the task remains to be seen.