Toto Wolff and Mattia Binotto spoke for an hour on Friday before the first practice session as rumours of Red Bull and Aston Martin’s rule breaking emerged, according to reports. Auto Motor und Sport claimed Red Bull’s competition “feels cheated” if Max Verstappen was able to win the championship because the team spent more money.

Red Bull stressed the reports of spending more than the budget cap allowance was “just speculation at this stage”, while Aston Martin has claimed they were “in discussion with the FIA”. Meanwhile, team boss Christian Horner denied any wrongdoing, stressing he was not aware of any breaches.

However, Wolff hit back at Horner after practice yesterday, claiming the team had been under investigation for months. The Mercedes boss explained: “It’s funny that Christian says that, because it’s weeks and months that they are being investigated. Maybe he doesn’t speak to his Chief Financial Officer.” 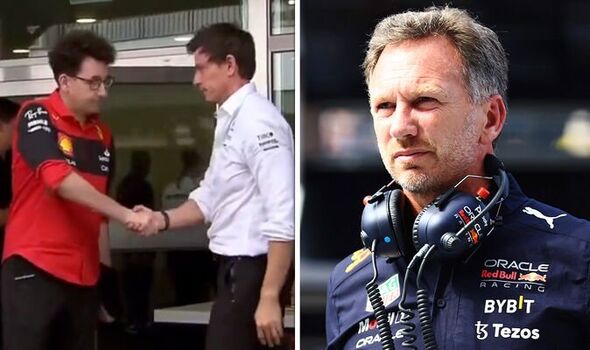 “If it’s true they’ve homologated a lightweight chassis this year, they may use it next year. It’s a real cascade of events that can be influential in all the championships.” Auto Motor und Sport suggests Red Bull could have exceeded the cap by around $10million (£9m).

This would be over the five per cent considered to be a “minor violation” meaning heavy penalties could be issued. If true, the team could be hit with intense sanctions including the loss of Drivers’ and Constructors’ Championship points.

The FIA has confirmed a formal process is underway to look into teams’ budgets before compliance certificates are issued next week. 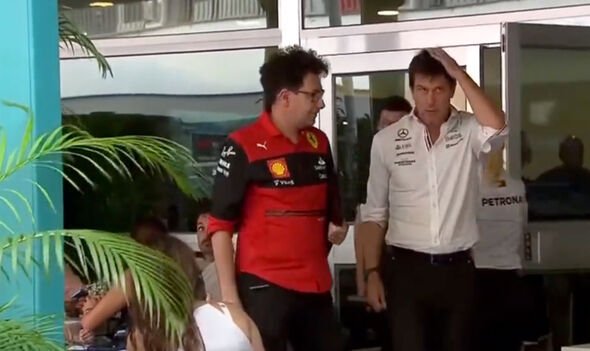 Ferrari race director Laurent Mekkies said the issue was a ”very serious” and called for the “maximum punishment” available. He commented: “It’s now no secret that two teams broke the 2021 budget cap regulations, one by a significant amount, the other less so.

“We regard this as something very serious and we expect the FIA to manage the situation in exemplary fashion. We trust the FIA 100 per cent. They have taken a very strong position in recent weeks and months on other issues.

“Therefore we expect that, for such a serious matter, there will be complete transparency and maximum penalties to ensure we are all racing within the same rules, because their impact on car performance is huge.”