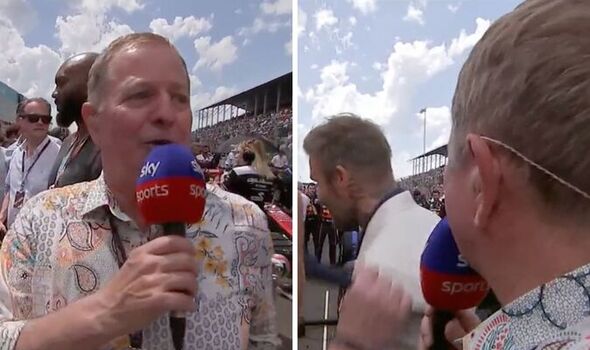 Martin Brundle has fired back on social media after clips of his struggles on the Miami Grand Prix grid went viral over the weekend. Brundle suffered numerous blunders in the moments leading up to Sunday’s inaugural F1 race at the Miami International Autodrome.

The popular Sky Sports F1 figure has grown a reputation for his entertaining interviews with drivers and team bosses on the grid before each race. But the cars on the Miami starting grid were swarmed by A-list celebrities wanting to be a part of history, which unsurprisingly made for great viewing.

It wasn’t the smoothest of warm-ups for a historic race, which Max Verstappen won by overtaking Ferrari duo Charles Leclerc and Carlos Sainz from P3 on the grid. And Brundle has since taken to social media to hit back at those who were entertained by his nightmare.

Brundle surprised Twitter by admitting he ‘dislikes’ doing the grid interviews he’s become so popular for over the last two-and-a-half decades. He also revealed that he never watches his grid interviews back, which will likely be the same for his latest chapter.

He wrote: “There’s a reason why I’ve never watched back an F1 grid walk in a quarter of a century of doing them. You have no idea how much I dislike doing them, but somehow, those crazy moments have defined my professional career. Oh well, that’s the way it is.”

Verstappen continued his record of winning every race he has finished this season, pipping Leclerc for his third triumph and second on the bounce. The Dutchman has closed the gap to his lifelong rival to just 19 points ahead of the Spanish Grand Prix later this month.

Despite both Leclerc and Carlos Sainz joining Verstappen on the podium, Ferrari’s lead on Red Bull has also been cut to just six points in the Constructors’ Championship race.