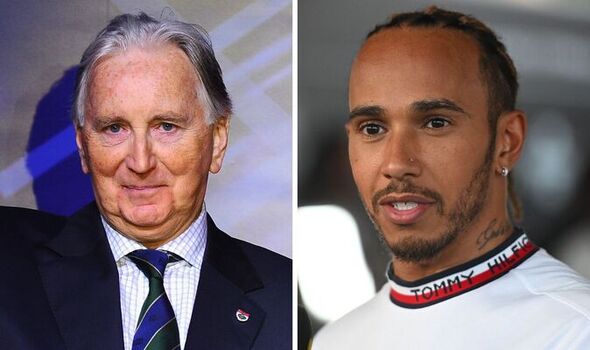 Lewis Hamilton has been told to “not act like a pantomime dame” by former F1 star John Watson. The seven-time world champion has found himself in an unfamiliar position this year of not challenging for race wins.

After just four races, Hamilton admitted defeat in this year’s Drivers’ Championship in his search for a record eighth world title. Mercedes have been playing catch up to Red Bull and Ferrari in trying to find the right balance to their unruly W13.

In order to get the most downforce, Mercedes have had to bring their ride height extremely low to the point where the car is generating porpoising down the straights. Mercedes aren’t the only team to suffer from the phenomenon, but many accept that they have it worse than others.

The bouncing effect was evidently worse at the Azerbaijan Grand Prix with on-board cameras showing both Hamilton and George Russell bouncing incessantly in their cockpits. At one stage during the race, Hamilton came on team radio to complain of back pain.

The 37-year-old had indicated throughout the weekend that the track and car set-up wasn’t kind on his back. And Hamilton found it difficult to get out of his car following the gruelling race around the streets of Baku on Sunday.

He has since allayed any fears that he will be forced to miss the Canadian Grand Prix due to the back injury, but has joined his fellow drivers in calling for changes to the regulations to stop the issue continuing in the future. Watson, who won five races in F1 with four coming at McLaren, has sympathy for Hamilton’s situation.

But the 76-year-old has seemingly hit out at Hamilton for his lifestyle away from F1, suggesting more time in the gym would help his body cope with the porpoising.

“Lewis needs to be careful not to act like a pantomime dame,” Watson told the Daily Mail. “It is a very difficult car to drive but at 37 the bones are not as forgiving of an uncomfortable ride.

“This is a whole new world to Lewis. He has had seven or so years when Mercedes have been dominant and it’s perhaps like a seven-year itch. George looked pretty fresh afterwards and finished third to Lewis’s fourth.

“Lewis maybe needs to recalibrate and spend less time in the air and more in the gym.”