The Elite Eight field is set.

Following some down-to-the wire Sweet 16 games, the remaining teams are just one game away from playing into April – in the Final Four.

We have three No. 1 seeds, one No. 2 seed and one No. 3 seed among the teams still dancing. But this tourney has hardly been all chalk, and we can thank the Pac-12 for that – with three unexpected teams advancing this far.

No. 12 seed Oregon State has led the bracket-busting as an automatic qualifier that didn't even have a March Madness ticket until winning the Pac-12 Tournament, while fellow Pac-12 double-digit seed UCLA pulled off the biggest upset of the Sweet 16 by ousting No.2 Alabama in an overtime thriller. No. 6 Southern California rounds out the field after dumping Oregon.

SWEET 16 RECAP: What you missed in women's, men's tournaments on Sunday

What we learned from the Sweet 16, as it applies to the Elite Eight:

The two teams have been No. 1 and No. 2 in the Ferris Mowers Coaches Poll throughout most of 2020-21 and have continued to look like national title favorites in this tournament. The Bulldogs (29-0) cruised past Creighton in the Sweet 16 and have been putting on offensive clinics with its three stars – Corey Kispert, Drew Timme and Jalen Suggs. The Bears (26-2) aren't undefeated like the 'Zags, but they have 11 top-30 NET victories – including impressive wins in the NCAAs over Wisconsin and Villanova – since January compared to Gonzaga's two. Baylor's just as dangerous offensively and returns its entire group from last year's team. The backcourt trio of Jared Butler, MaCio Teague and Davion Mitchell averages more than 46 points combined and helps Baylor lead the field in three-point shooting.

The Wolverines (23-4) are proving doubters wrong by winning – and winning big –without second-leading scorer Isaiah Livers. Coach Juwan Howard has inspired his team and, as a result, Michigan has looked very much the part of the No. 1 seed it earned in wins over LSU and now Florida State. In an 18-point victory over the Seminoles on Sunday, Michigan got help from its supporting cast. And there are still two stars on this roster in All-American big man Hunter Dickinson and 6-9 guard Franz Wagner. It's not as if Michigan is a dark-horse to win it all as a No. 1 seed, but how fast this group has been able to regroup without one of its best players speaks to the winning culture Howard has instilled. While the other eight Big Ten teams are at home, Michigan is still dancing. 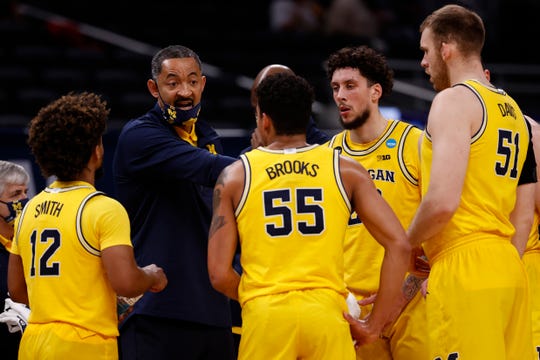 Michigan coach Juwan Howard speaks with the Wolverines during a timeout in the second half of their Sweet Sixteen round game against the Florida State Seminoles in the 2021 NCAA Men's Basketball Tournament at Bankers Life Fieldhouse on March 28, 2021 in Indianapolis. (Photo: Jamie Squire, Getty Images)

Which Pac-12 team gets to the Final Four?

Three Pac-12 teams are in the Elite Eight in one of the most impressive runs by a conference in NCAA Tournament history. The league is 12-2 overall in March Madness, and one of those losses was inevitable as Southern California ended Oregon's season in the Sweet 16. But the biggest surprises have come from No. 12 seed Oregon State – which beat Loyola Chicago in the Sweet 16 – and No. 11 seed UCLA. The Bruins suffered a gut-punch after a buzzer-beating three-pointer forced overtime vs. Alabama on Sunday. But the resiliency of coach Mick Cronin's squad was on display in overtime, during which UCLA outscored 'Bama 23-13.

Which team is most likely to stun and reach the Final Four? USC might have the tallest test in facing top overall seed Gonzaga. As good as coach Andy Enfield's team has been in these NCAAs, the 'Zags are an offensive juggernaut that no team looks capable of beating. It'll take a determined effort and big-time performance from freshman 7-footer Evan Mobley against Gonzaga big man Drew Timme.

UCLA faces a Michigan team that's playing well, but will miss the toughness Livers provided, and toughness is exactly where the Bruins could thrive to pull off a stunner. Then there's Oregon State. The Beavers take on a Houston team that looked great on both ends in dismantling Syracuse in the Sweet 16. But this team is still beatable. Wins for Oregon State over Tennessee, Oklahoma State and Loyola Chicago serve as evidence for why coach Wayne Tinkle's group can be a No. 12 seed in the Final Four. 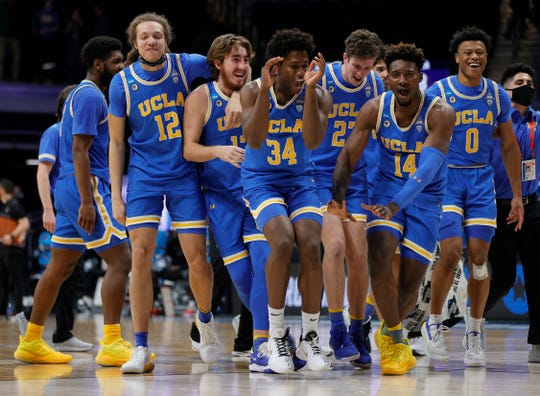 David Singleton of the UCLA Bruins and Kenneth Nwuba celebrate with teammates after defeating the Alabama Crimson Tide 88-78 in overtime in the Sweet Sixteen round game of the 2021 NCAA Men's Basketball Tournament at Hinkle Fieldhouse. (Photo: Sarah Stier, Getty Images)

Rarely is a No. 2 seed or a No. 3 seed considered a sleeper. But Houston and Arkansas are. . At the No. 2 seed line, Ohio State lost to Oral Roberts in the first round, Iowa got pummeled by Oregon in the second round, and Alabama just lost to UCLA in overtime in the Sweet 16. Coach Kelvin Sampson has a team with great guard play and a top-notch defense – ranking second nationally by limiting opponents to 57.5 points a game. The Cougars smothered Syracuse star Buddy Boeheim and could have a similar effect on Oregon State star Ethan Thompson.

At the No. 3 seed line, Texas lost to Abilene Christian in the first round, Kansas got pummeled by USC in the second round, and West Virginia lost to No. 11 seed 'Cuse in the Sweet 16. That leaves Arkansas, the comeback team of this tournament after pulling off wins vs. Colgate, Texas Tech and Oral Roberts when the Razorbacks had trailed. Coach Eric Musselman's team is loaded offensively, especially in the backcourt, with Moses Moody (17 points per game). They've got a shot at matching up well against Baylor's dynamic backcourt.