Jalen Brunson scored 34 points, including a couple crucial free throws with 13.9 seconds left, and the New York Knicks held off a furious Washington rally in a 112-108 victory over the Wizards on Friday night.

Julius Randle had 23 points and 16 rebounds for the Knicks, who won for the sixth time in seven games. He also provided the game’s biggest highlight with his left-handed dunk in the third quarter over Washington’s Daniel Gafford.

The Knicks went on a 14-0 run early in the fourth, and they still led 105-94 with 2 minutes remaining before Washington nearly took the game back. A layup by Kyle Kuzma cut the lead to three with 27 seconds remaining, and then Randle made just one of two free throws. 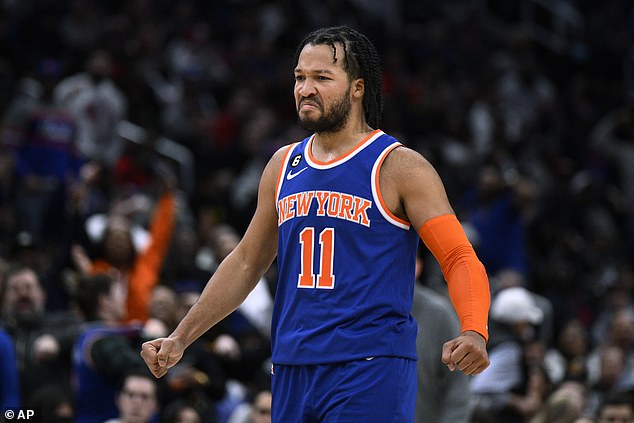 Kuzma was fouled shooting a 3-pointer with 16 seconds left, but he made only two of three attempts from the line. Then Brunson made both of his free throws to make it 110-106.

Kuzma and Rui Hachimura missed at the other end, and two more free throws by Brunson made it a six-point game with 3.5 seconds to play. Kuzma then made a shot at the buzzer to finish with 40 points on the night.

‘Jalen Brunson. He just took over the game,’ Kuzma said. ‘He’s an All-Star this year. He’s been playing phenomenal basketball. You can just tell from the team last year to this year, they have more poise and patience, and they look for him, and he delivered tonight.’

Jordan Poole scored 25 points, Donte DiVincenzo added 22 and the Golden State Warriors beat the San Antonio Spurs 144-113 on Friday night before an NBA-record crowd of 68,323 at the Alamodome.

The attendance shattered the previous regular-season record of 62,046 who watched Michael Jordan and the Chicago Bulls play the Atlanta Hawks at the Georgia Dome on March 27, 1998.

The Spurs normally play at the AT&T Center but returned to their former home as the franchise celebrates its 50th anniversary.

Golden State set its season high in points, surpassing its previous high in a 143-141 victory in double-overtime over Atlanta on Jan. 2.

Klay Thompson had 16 points and Stephen Curry added 15. Tre Jones had 21 points for San Antonio. The Spurs have lost four straight and seven of eight. 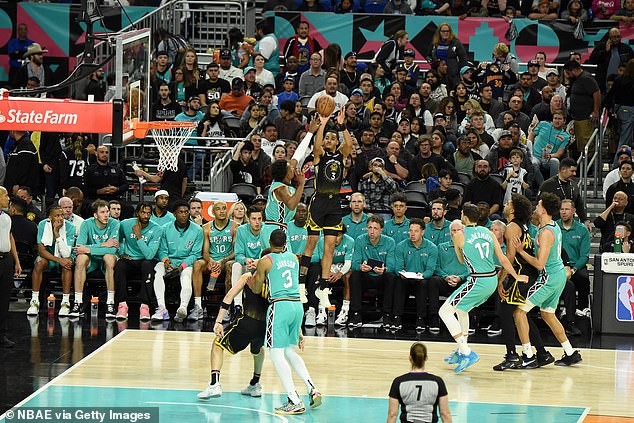 John Collins tipped in a missed shot with less than a second left to give the Atlanta Hawks a 113-111 victory over the Indiana Pacers on Friday night.

Trae Young scored 26 points and De´Andre Hunter had 25 for the Hawks. Young was 6 of 10 from 3-point range and Hunter 6 of 9. Hunter´s six 3-pointers were a career-high. The Hawks made 16 of 31 3-pointers overall. Onyeka Okongwu added 18 points and a career-high 20 rebounds.

Bennedict Mathurin scored 26 points and Buddy Hield had 18 points for Indiana. The short-handed Pacers who were without three starters.

After Dejounte Murray, who scored 18 points, stole the ball and scored to give the Hawks a 108-107 lead. Mathurin scored to put Pacers ahead 109-108 with 58 seconds left. He was fouled on the basket but missed the free throw. 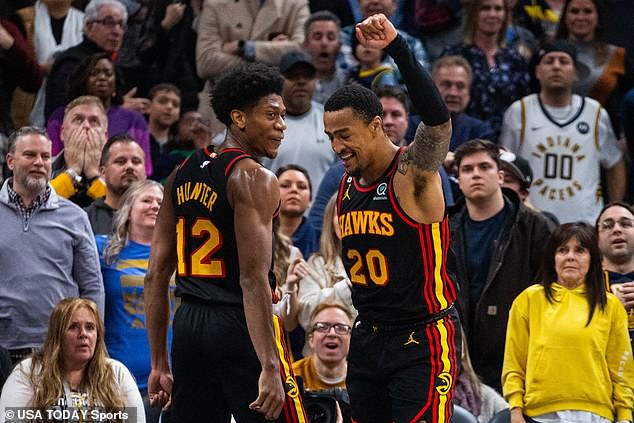 ‘When we are hitting shots, we tend to play defense,’ Hawks coach Nate McMillan said. ‘It was good to see some of those shots go down. Our last game (against Milwaukee) it was like something was over the rim and nothing would fall for anybody. Tonight those shots started to fall. De´Andre got hot and started to knock down shots and so do Trae. I thought our defense was really good to hold them to 22 points (in the fourth quarter).’

Jonas Valanciunas scored 13 of his 33 points in the first quarter and the New Orleans Pelicans went on to beat the Detroit Pistons 116-110 on Friday night.

‘JV had a monster game,’ Pelicans coach Willie Green said. ‘He dominated in the post and he dominated on the boards and we needed every point and every rebound.’

‘For our team to be really successful everybody has to eat,’ Murphy said.

With key players out of the lineup, Pelicans such as Murphy are taking advantage of increased roles.

‘It helps with the growth of all of our guys,’ Green said. ‘The ability to get meaningful minutes pays dividends.’ 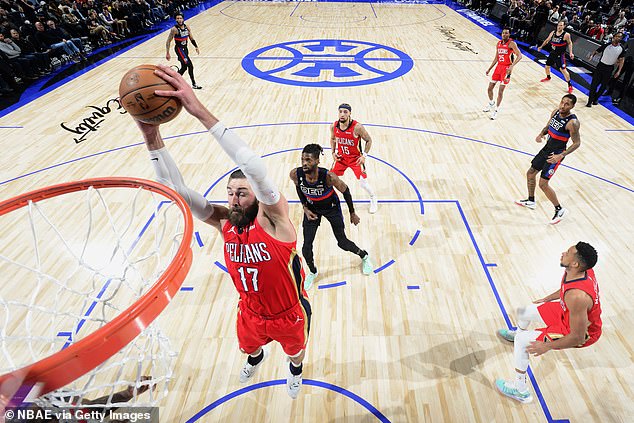 Jonas Valanciunas had a ‘monster game’, according to his Pelicans coach Willie Green

Taurean Prince added 16 points off the bench and fellow reserve Naz Red had 13 points for Minnesota. The Timberwolves won for the fourth time in five games and bounced back from a 135-118 loss in Detroit on Wednesday night.

Damion Lee led Phoenix with a career-high 31 points and Mikal Bridges had 24. The Suns were again without stars Chris Paul and Devin Booker, along with Cameron Johnson and backcourt backups Cameron Payne and Landry Shamet.

Deandre Ayton returned after missing two games with a left ankle sprain and had 11 points and 11 rebounds. 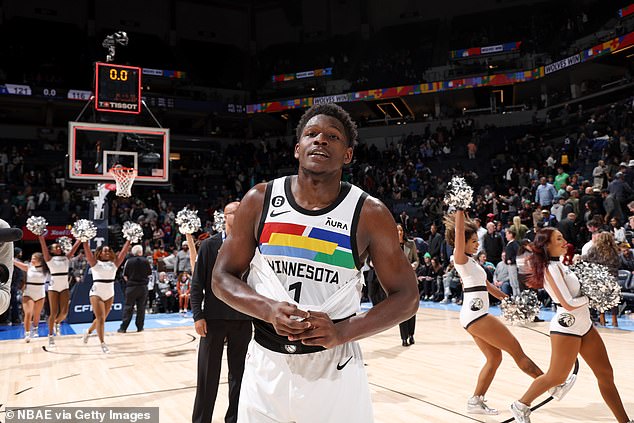 Rookie Jalen Williams scored 22 points and Shai Gilgeous-Alexander added 21 for the Thunder. They have won two straight, four of five and completed a sweep of their season series against Chicago. 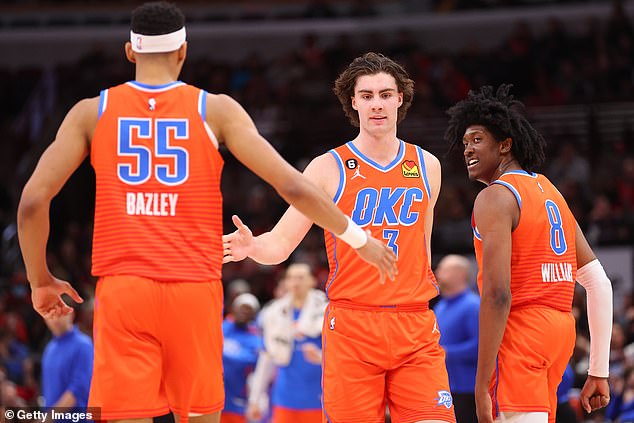 Markkanen switched onto Wagner beyond the 3-point line and blocked the attempt to tie just as the shot left Wagner´s hand.

Wagner, who scored 26 points, matched a career best of five 3-pointers, including an off-balance 28-foot runner to beat the third-quarter buzzer. 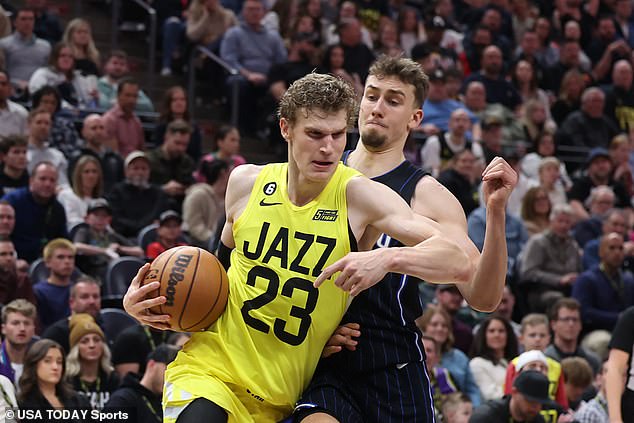 The Nuggets gained sole possession of first in the Western Conference over the idle Memphis Grizzlies despite the absence of Nikola Jokic. He missed the game because of right wrist management.

The Nuggets defeated the Clippers for the second time in a week, although this one was much closer than the 31-point beatdown they handed out at Ball Arena.

At least until the fourth quarter. That’s when the Nuggets pulled away, stretching a three-point lead into double digits. They scored nine in a row to go up 104-92, their largest lead of the game. Aaron Gordon hit a 3-pointer and Bruce Brown added four points. Gordon finished with 17 points. 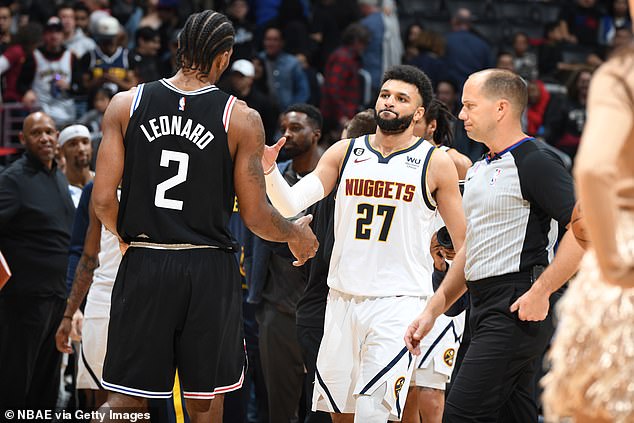 Domantas Sabonis recorded his fourth triple-double of the season and the Sacramento Kings beat the skidding Houston Rockets 139-114 on Friday night for their third straight win.

With 11:09 left, Malik Monk, Chimezie Metu, Tari Eason and Garrison Matthews were all ejected. Monk and Matthews went face-to-face after a foul was called on Monk during a fast break.

Jalen Green scored 27 points for the Rockets (10-32), who have lost nine consecutive games and 14 of their past 15. Jabari Smith Jr. had 27 points and eight rebounds. 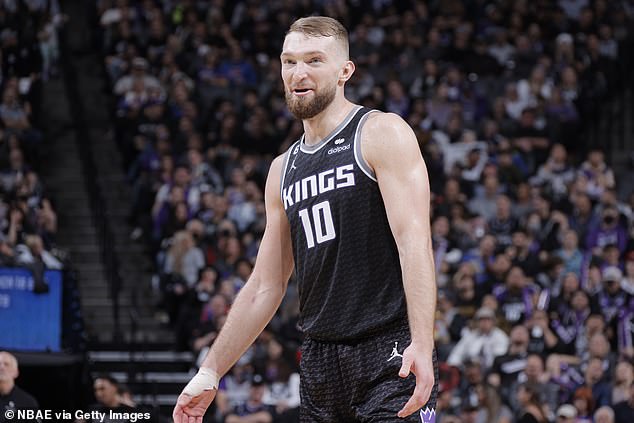