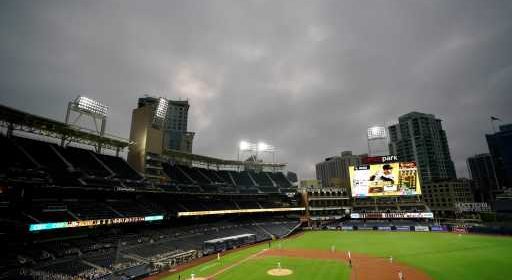 In 2018, the Rockies went 91-72, made the playoffs and came up one victory short of winning their first National League West title. The future looked bright.

San Diego, though flush with talent in its minor league system, finished 70-92, last in the division.

My how things have changed.

After consecutive losing seasons colored by frustration, the always-conservative Rockies are now a team in limbo, with most predicting a last-place finish this year. The Padres, meanwhile, have become baseball’s most-aggressive franchise.

After getting swept by the World Series champion Dodgers in the National League division series, the Padres didn’t stand pat. Rather, they’ve dramatically improved during the offseason, giving them a chance to not only end the Dodgers’ eight-year reign in the NL West but giving them a legitimate shot at a World Series title.

The Rockies? They’re all about uncertainty.

The future of their two best players — unhappy third baseman Nolan Arenado and shortstop Trevor Story, who’s scheduled to become a free agent after the 2021 season — are huge looming questions. And Colorado, like many other teams, is in salary-slashing mode after a pandemic-stricken season with no fans in the stands.

Thus far, the Rockies’ offseason has been tepid. Their most newsworthy move was cutting ties with oft-injured outfielder David Dahl, an all-star in 2019 who subsequently signed a one-year, $3 million contract with Texas.

“Sometimes it’s tough to move on (from) guys and say goodbye, but there are times when you have to, for business reasons,” general manager Jeff Bridich said at the time. “There (was) a combination of those sorts of business reasons at play here … based on what’s going on in the industry. I won’t say it’s business as usual.”

San Diego took a very different approach. GM A.J. Preller has been wheeling, dealing and spending in an effort to make the Padres the best team in baseball. He saw a wide-open window to win and took a leap of faith.

First, the Padres traded four young players, including premium power arms Luis Patino and Cole Wilcox, to Tampa Bay for former Cy Young winner Blake Snell, who is guaranteed $40.8 million over the next three seasons. For the low-budget Rays, Snell’s salary was too big a financial burden in these uncertain times. For the Padres, Snell was a necessary piece of their puzzle.

Keep in mind that the Padres are not a big-market team. San Diego ranks as the 29th-largest media market in the U.S., wedged between Nashville and Salt Lake City. The Padres, according to Forbes, ranked 16th out of 30 teams in revenue in 2019 ($299 million).

Acquiring Snell, who led the Rays to the 2020 World Series, was just the start. The Padres next targeted the Cubs, a large-market team shedding salary. The Padres landed right-handed ace Yu Darvish, along with his personal catcher Victor Caratini, in exchange for a five-player package including established mid-rotation starter Zach Davies and four prospects. Darvish is guaranteed $59 million over the next three seasons.

“We talk about it a lot: You can never have enough true front-of-the-rotation-type major league starters,” Preller told reporters. “We feel like we have a bunch now.”

But Preller still wasn’t done. The Padres then signed South Korean slugger Ha-seong Kim, 25, to a four-year, $28 million, free-agent deal that could be worth $34 million over five seasons if a mutual option is exercised.

“The main reason I joined the Padres is that the Padres are not only a contender but will become the World Series champions this year. I want to be part of a winning team,” Kim said through an interpreter during an introductory videoconference.

Although Kim played shortstop and third base primarily in Korea, he’s likely to see the bulk of his action at second base with the Padres, possibly serving in a platoon role with the lefty-hitting Jake Cronenworth, the runner-up for NL rookie of the year in 2020. With Manny Machado at third, Fernando Tatis Jr. at shortstop and Eric Hosmer manning first, the Padres have an incredibly talented infield. And if the designated hitter is adopted, this season or next, landing Kim provides San Diego with everyday firepower.

The Padres had stocked their farm system for years and now it’s paying off. And acquiring Snell and Darvish actually cost them little in terms of on-field talent. They retained almost all of the top minor-leaguers from their top-ranked farm system, including five prospects on Baseball America’s Top 100 list.

“Everybody in the organization is fired up, from top to bottom,” Preller said. “Again, it’s all part of, really, the last-five-year plan.”

Now it’s the Padres, not the Rockies, who rival Los Angeles in the NL West.

“When you look at this lineup and you look at the rotation we’ve put together … it’s hard not to get excited,” Snell said. “This team is lights-out. It’s time for us to put the work in and make this happen; because we have the team to do it.”