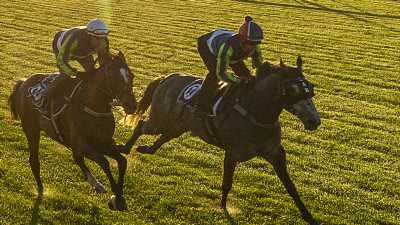 Like many a human from a colder or wetter climate who blossoms in a warmer, dryer environment, horses can improve out of sight when they find more favourable conditions.

Neufbosc, a grey gelding named after a district in Normandy in his native France, could not get warm – metaphorically – when he was imported from Europe to race in Victoria in 2019.

The Lindsay Park team – then headed by now Hong Kong-based David Hayes – had high hopes that the son of Coolmore stallion Mastercraftsman would turn into a serious Cups contender when he was bought from his French stable by Seymour Bloodstock, Mark Pilkington and other investors. 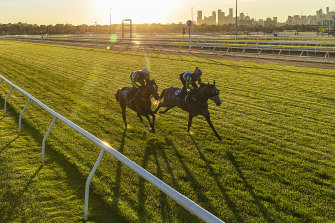 Neufbosc, pictured right at Flemington in 2019, has thrived in a hotter climate, under trainer Neville Parnham. Credit:Daniel Pockett

But time and again Neufbosc disappointed them. In 11 starts in Victoria he only hit the frame once, when third in the Sandown Cup, a listed 3200-metre race at the end of the spring carnival, following a disappointing 21st of 24 behind Vow And Declare in the 2019 Melbourne Cup.

Fast forward nearly a year and Neufbosc – uprooted from rural Victoria to the hotter, dryer environment of Perth – is a changed horse.

The syndicate that owns him had a last roll of the dice and shifted him to leading West Australian trainer Neville Parnham, hoping that a change of scenery and lesser opposition in WA might give him more opportunities.

It was a decision that paid off better than anyone might have expected when Neufbosc, ridden by Parnham's son Chris, landed WA's best known race, the Perth Cup, beating the top weight and favourite Truly Great.

"It was fantastic to take out the race with my son in the saddle," Parnham said on Sunday as he reflected on Neufbosc's transformation.

"Chris has been obsessed with the Perth Cup since he was about three or four. It's the one race he has always wanted to win, so to do it with him is a great thing."

He cannot put his finger on one thing or another which has helped the horse turn his form around.

"I wouldn't really know what I have done. Maybe the horse took some time to acclimatise after coming here from Europe. He's got a bit of sun on his back and maybe he doesn't like the wetter tracks they have over in Victoria," he said.

"He's really been enjoying his racing and I could not have been happier with him. I backed him up within a week [after his win on Boxing Day over 2200m] and he has backed up well for me before."

Parnham does not necessarily believe that Neufbosc, now that he has hit his straps, needs to return to Melbourne, the scene of his disappointments, to prove a point.

"We will talk about it with the owners. He could carry on, he could have a spell now and we can aim him at some nice races in Perth in the winter. Adelaide or Brisbane could also be discussed. Nothing is in or out," Parnham said.