A jockey who allegedly placed bets under a name different to that in the form guide has been disqualified from riding for eight years.

Daniel Jack Smith, who rode under the name Terry Treichel, was hit with 32 charges relating to betting and false declaration after Northern Territory racing stewards investigated allegations he was placing bets on horses he was riding at an Alice Springs meeting in December last year.

He was disqualified for three years for riding under a name different to his actual name and a further five years for the betting charges. Smith can appeal.

Chris Waller’s group 1-winning stars Nature Strip and Kolding will not head to Brisbane for the lucrative winter carnival.

“Whilst we had hoped both horses would get to Queensland, we have made the decision that to prepare properly for the spring, they need to have a decent break,” Waller said in a statement released on Friday. 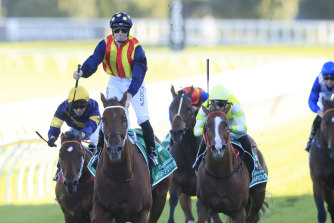 “I can see both horses are not quite as bright as they were mid-preparation and I would rather stop now than know that I have gone one run too far.

“Nature Strip will follow a typical Everest path and Kolding will be prepared for the Winx Stakes, either first or second-up.”

Nature Strip won the TJ Smith Stakes in clinical fashion at his last start, while Kolding won the All Aged Stakes last weekend.

Popular sprinter-miler Behemoth will race first-up in the Goodwood Stakes in Adelaide, with top Victorian jockey Craig Williams committing to the ride.

Behemoth won a soft trial at Strathalbyn on Friday morning and Grand Syndicates racing manager Sam Lyons said the big boy was on-song for the group 1 tilt, a race he finished second in last year.

“He’s a horse that goes well into his races off a jumpout close to the runs. It’s something we have used well previously. That said, we are not locked into that just yet,” Lyons told racing.com.

“We will see how he comes through this and then David [Jolly] will make a call where he is at fitness-wise. But there is a chance we have a jumpout the week leading up to the run.” 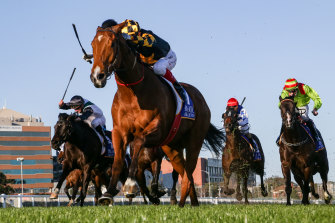 Craig Williams will steer Behemoth first-up in The Goodwood.Credit:Getty Images

Adelaide will also host the Australasian Oaks, headlined by VRC Oaks winner Personal. However, the big move has been for Ciaron Maher and David Eustace’s filly Steinham, backed in from $26 to $4 favourite, from undefeated Tassie horse Hela, $21 into $5 second elect.