When spectators used to come to the Sydney Cricket Ground with delusions they were a part of the action, they were held back by barbed wire. A token force of security guards and heavy fines now hold back those would-be heroes. Pitch invasions are a thing of the past, and behaviour has changed.

Instead, those would-be participants now invade the ground with their voices. Most spectators come to the cricket to appreciate the game and admire the players. Many support their team passionately, and a small minority carry that support so seriously that they will belittle their country’s guests, in the delusory belief that if they can put the Indians off their game, they can help their team win. Guess what? They didn’t. 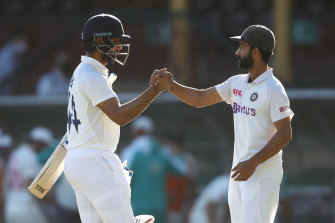 Nobody has much idea how to stop the verbal abuse of players, whether racially inflected or not. Education must be the answer, but decades of education have only left more questions.

Enforcement, by cricket authorities, police or ground security, is a Band-Aid. When players take matters into their own hands and say ‘‘no more’’, as the Indian team did over the weekend, they let themselves in for a renewed barrage.

If we assume the motivation for this abuse is simply partisan passions knowing no restraint, India provided their own solution to the problem on Monday. Here was a team united in its anger, resolute in its refusal to let their abusers win. They were not just playing against the Australian cricket team, a fierce foe in its own right, but against a picture they had formed of the Australian public. And if that section of the public played any role in this match, it was to solidify India’s resistance. Through an epic day of batting, Team India gave those people a taste of justice.

India had numerous heroes, all unlikely. Rishabh Pant had been too sore to take the field on Sunday, incapacitated by a blow to his left arm. Before the first kettle could boil, he was in the middle yesterday, replacing skipper Ajinkya Rahane, the team decapitated and forlorn.

Pant’s promotion up the order seemed a desperate break with orthodoxy. Instead, for three enchanted hours, he conjured a vision of victory. He carved the bowling to all parts, meeting aggression with aggression. He was out charging down the wicket once too often on 97, and only the hardest-bitten Australian begrudged him a century.

Cheteshwar Pujara has been setting an example of Indian grit for years, not to mention his four hours at the crease. But when he fell to the second new ball a few minutes after Pant, India were forced to quit their chase for victory and settle for an equally difficult plan B: survival.

Defence was made inevitable by the hamstring injury to Hanuma Vihari soon after he replaced Pant. Poor Vihari had an unfortunate match to cap an unfortunate series: after 49 runs in four innings, victim of a freak run out on Saturday, he spilled an easy catch on Sunday. And now he did his hammy running a single.

Incapable of running, Vihari had only one job. His series, after this, would be over. He was joined by Ravi Ashwin, who had spoken eloquently on Sunday night about a history of harassment from Australian spectators. That took courage of a certain kind, and now he required another kind.

The pair survived everything the Australians threw at them, and some gifts that the Australians handed back. Edges flew just past or over hands. Popped-up chances fell into open space. Yorkers curved in at the stumps or pads, but at the last moment the bat came down and jammed them out. Bumpers hit ribs and arms but did not take wickets. Substitute fielder Sean Abbott grassed a tough one, a pull shot from Ashwin. Vihari nicked Mitchell Starc and was put down by Tim Paine, the third miss by the captain, who moments earlier had been more occupied trying to break Ashwin’s concentration with his verbal wit.

India would not break. This was the message. The Australians’ dropped catches were critical, as in Melbourne. Their bowling strategy of playing the percentages, putting the ball in areas where the decaying pitch might help them, turned out to be a barren one when the pitch wouldn’t co-operate.

But to criticise the Australian shortcomings would be to take too much away from India’s maligned middle order, who emerged from the struggle with champion qualities. The Australian players can take responsibility for their deficiencies. They can also thank some of their self-described supporters for motivating India in the same way that the abuse orchestrated by some English spectators in 2019, directed at Steve Smith, played its part in losing England that series. Same as the Australians of half a century ago could thank an idiot on the SCG boundary for manhandling John Snow.

This was an Indian team that had already proven its toughness. The big mouths of the crowd had given them a further infusion. Mockery backfired on the mocker. Will this end up changing behaviour? That’s a lot to hope for. But yet again, a team that felt abused gave their taunters a proportionate reward for their actions.