Australian Jay Vine has tightened his grip on Vuelta a Espana mountains jersey as the grand tour heads into its third week.

The Queenslander, riding for Alpecin–Deceuninck, more than doubled his lead in mountains classification during Sunday’s brutal queen stage in the Sierra Nevada mountains. 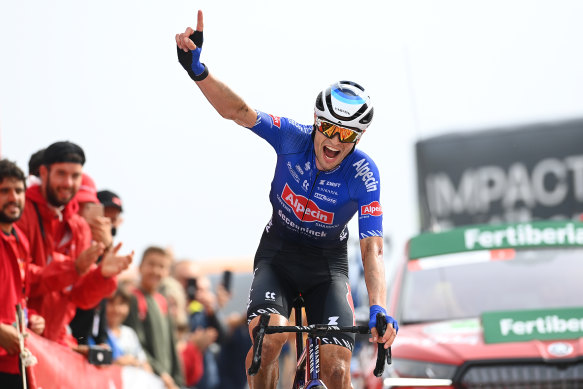 Jay Vine after winning stage 8 of the Vuelta on August 27.Credit:Getty Images

Vine, who’s already won two mountain-top stages, was in the thick of the action on the demanding 152.6-kilometre stage from Martos, winning an intermediate sprint atop the category one Alto del Purche climb before going on to finish fourth on the stage.

The man from Townsville increased his lead in the mountains standings from 14 to 29 points over Richard Carapaz (Ineos Grenadiers) going into the final week.

Vine also led a concerted three-man pursuit of the brilliant 22-year-old Arensman, who flew to his maiden grand tour victory, eventually finishing one minute 23 seconds clear of Enric Mas (Movistar), 1:25 ahead of Miguel Angel Lopez (Astana Qazaqstan) and 1:30 in front of the Australian.

O’Connor came home alongside Jumbo-Visma’s reigning champion Primoz Roglic, who clawed another 15 seconds back on 10th-placed Evenepoel with another late burst over the last couple of kilometres.

So for a second consecutive day, the Belgian leader has lost time at the top of the general classification, and his overall lead is now down to a still healthy 1:34 over three-time winner Roglic and to 2:01 over Mas.

The race will resume again on Tuesday’s stage 16, a 189-kilometre ride from Sanlucar de Barrameda to Tomares.