Matthew Glaetzer’s bid for a fifth Commonwealth Games gold medal has been shattered by a dramatic high-speed crash in the keirin which left Australia’s top sprint cyclist lying battered and bruised on London’s Olympic velodrome track.

His bad spill in the quarter-final on Saturday, which left his kit torn and tattered, also resulted in British cyclist Joe Truman needing oxygen at the side of the track before he came round from concussion. 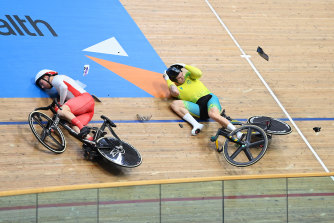 Matt Glaetzer’s bid for a fifth Commonwealth Games gold medal has been shattered by a dramatic high-speed crash.Credit:

The high drama occurred after Maeve Plouffe, tipped as the next big Australian women’s cycling star, won a second medal in the space of 24 hours after adding the 3000m individual pursuit silver to the gold she annexed in the team event.

And following up from the track team’s hat-trick of golds on the opening day, Plouffe’s fellow pursuiter Conor Leahy also grabbed his second bronze in two days in the men’s 4000m individual event.

But the two medals were overshadowed by the crash featuring Glaetzer, who was seeking to win the keirin sprint for the third successive time. 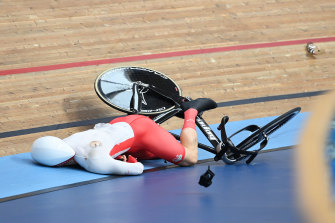 Joe Truman falls from his bike.Credit:Getty

In a clash of wheels with four riders all jockeying for position on the final circuit, Glaetzer was sent sliding and spinning to the floor but, though he looked stunned and was clearly hurt, it was Truman who suffered most.

There was loud applause in the arena when he sat up after his medical treatment and appeared to be fine.

Earlier in the dramatic session for Australia, Plouffe’s colleague Sarah Roy missed out, beaten in the 3000m bronze medal race.

Adelaide’s 23-year-old Plouffe had been thrilled on Friday to be part of the quartet which smashed the Games record en route to striking team gold and smiled afterwards that she was now after the individual title.

Plouffe, who’d clocked the second fastest time in qualifying to set up a final against the brilliant New Zealander Bryony Botha, found the Kiwi far too strong in the showdown.

Plouffe, who’d finished in 3:21.995 in the morning race, reckoned she had miscalculated her tactics in the final, setting off more conservatively yet never managing to eat back looked to have given her all by the time she got to the final and was almost caught on the line by her opponent, who’d started the final on the opposite side of the 250m track.

In the third-place race, 36-year-old Roy, the versatile veteran who’d finished fifth in the road race four years ago, also had to give best to beat Neah Evans.