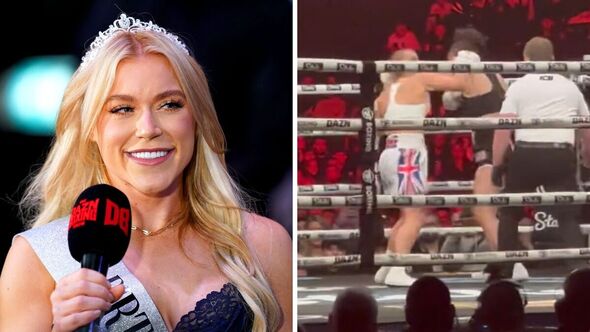 OnlyFans star Elle Brooke stopped influencer Faith Ordway after just one minute and forty-one seconds of their crossover boxing bout on the KSI vs FaZe Temperrr fight card. In a contest which was billed as “the best women’s fight in influencer boxing history,” both women put it all on the line for the fan’s entertainment.

Despite coming in with a sizeable height and reach advantage Ordway was unable to keep Brooke at bay as the TikToker swarmed her novice foe. Big shots were landed on both sides but the more telling blows came from Brooke who sent her adversary to the canvas inside the opening sixty seconds.

After finding her way back to her feet, Ordway found herself in further trouble when the action restarted with Brooke once again closing the distance quickly. Beckoned on by her corner – which included experienced trainer Mark Tibbs and world champion Ebanie Bridges – Brooke backed up Ordway against the ropes with a series of hard flurries forcing the referee to step in and wave off the contest.

Brooke now improves to 2-0 as a boxer while Ordway falls to 0-1 on her debut. Speaking to the DAZN broadcast after the fight, Brooke took the opportunity on to call out fierce rival Astrid Wett who was set to face Brooke on the Ed Matthews vs Simple Simon card in June before pulling out: “That is what you call a TKO. If you want it Astrid [Wett] I will give it to you, 56,57,58.

“You guys are lucky to see the best two influencer boxers fight in that ring tonight, me one, Faith two. Honestly, you’re so b**** lucky.”

“She [Ordway] fought so bloody well, I’ve never bled like this before,” added Brooke sporting a bloody nose. “Honestly, Faith was such a great opponent tonight and she put it on the line so hats off to her.”