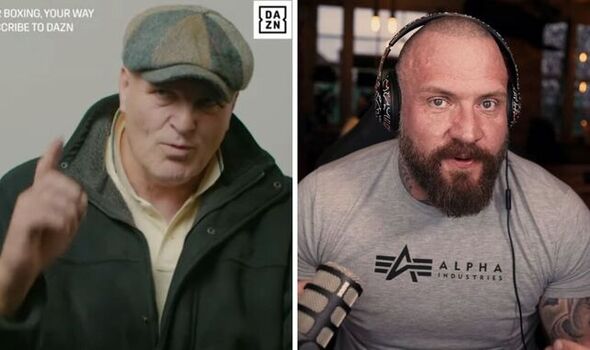 Tyson Fury’s father John has backed his son’s actions during last week’s infamous True Geordie interview. ‘The Gypsy King’ hurled insults at Geordie – whose real name is Brian Davis – after the YouTuber grilled him on his upcoming contest with Derek Chisora.

Fury faces Chisora for a third time on December 3 after convincingly beating ‘Del Boy’ on two occasions in 2011 and 2014. Davis challenged Fury’s decision to face his former foe over better competition – which the Mancunian took exception to.

Growing increasingly frustrated by the line of questioning, Fury boiled over at the end of the interview, branding Davis a ‘t***pot’ and telling him to ‘kiss his b****’ as he stormed off their video call.

Now, Fury’s dad has reacted to the video and claims his son was ‘absolutely right’ in shooting down the YouTube star.

“I just think that Tyson was absolutely right in what he said,” John told DAZN. “He jumped all over him, he was being what they call, what’s the word for it? Obnoxious. Why not say Del Boy’s a good fighter? Yeah, he’s lost a few but look who he’s lost to and they’ve all been close fights, could have gone either way.

“There’s a few times out of those fights he’s lost I thought he won them. He’s as good as anybody else out there and he had got the minerals to step up to the plate and box hasn’t he. So, he deserves his money, and they can still argue, gripe, do the podcasts, do what they can do.

Providing everything goes to plan against Chisora, Fury is expected to face unified heavyweight champion Oleksandr Usyk for all four major sanctioning body belts. The pair were in discussions to face each other in December. However, Usyk ruled himself out of competition until early 2023.

According to promoter Frank Warren, Fury and Usyk will face each other in February or early March next year in the Middle East. Having already gone undisputed at cruiserweight, the Ukrainian will be fighting to become the first two-weight undisputed champion of the four-belt era.