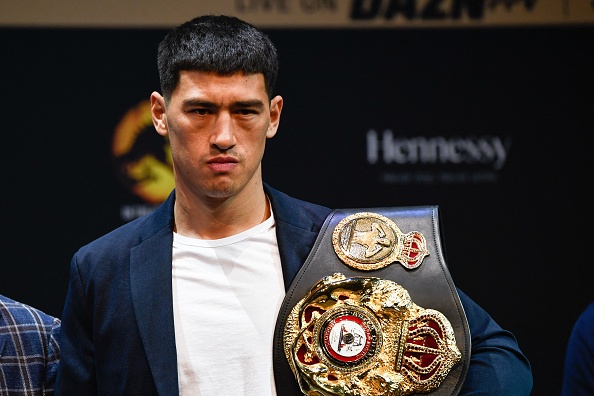 The Russian flag and national anthem will be banned when Dmitry Bivol takes on Saul ‘Canelo’ Alvarez in Las Vegas tonight.

Bivol, undefeated in 19 fights, puts his WBA light-heavyweight title on the line against pound-for-pound no1 Canelo, who is moving up in weight class after unifying the super-middleweight division last year.

As Mexico’s biggest boxing superstar, Canelo has become accustomed to fighting on Cinco de Mayo which falls this weekend, the Mexican holiday and a special date on the boxing calendar traditionally reserved for the biggest fights of the year. There will be a festival atmosphere on fight night inside the T-Mobile Arena to mark the occasion with Mexican flags present down the Las Vegas strip all week.

It is customary for the national anthems of both fighters, along with that of the host country, to be played before the opening bell.

While there will be plenty of colour from the Mexican side tonight, Bivol will not be allowed to enter the ring with the Russian flag or have his national anthem played.

Following the invasion of Ukraine on 24 February, Russia has been hit with wide-ranging sanctions with Russian sport greatly impacted.

Three of world boxing’s major governing bodies – the IBF, WBO and WBC – responded to the Russian invasion by vowing to block ‘championship fights involving boxers from Russia and Belarus.’

The WBA, the championship which Bivol holds, stopped short of such measures, however. As such, Bivol is free to defend his title tonight but is not permitted to enter the ring with his flag present, the national anthem is not allowed to be played and his country will not be named during his ringwalk.

In an interview with The Guardian this week, Bivol also revealed his father, who would normally travel from St Petersburg to watch his fights from ringside, will not be present tonight having been unable to get a visa to enter the US.

‘Every time they worry about me and this is a real dangerous fight,’ Bivol said of his family. ‘But they understand I love boxing. It helps my family and I am happy boxing helps me realise my potential.’

Bivol was born in Tokmak, Kyrgyzstan, but has been a long-time resident of St Petersburg and is a Russian citizen.

He has said he wishes ‘only for peace’ when asked about the war in Ukraine and the 31-year-old has not expressed his support for Russian president Vladimir Putin.

Former heavyweight champions Vitali and Wladimir Klitschko, who have both remained in Kyiv amid the conflict, have called for all Russian boxers to be banned as part of sanctions against the country.

Responding to those comments this week, Bivol said: ‘All his career I support him, I liked how he was fighting and of course I was glad when he won.

‘He is [a] sportsman, he should know sports and politics is different. He was [an] athlete. Now he is politician. It is sad that wants to shake it up and mix sport and politics.’