Jai Opetaia has pulled off a stunning upset, defeating the man previously considered the world’s best cruiserweight, Mairis Briedis, to become the IBF and Ring Magazine champion. The feat was achieved despite Opetaia suffering a broken jaw in the second round.

Opetaia has etched himself into sporting folklore with a unanimous decision when the judges scored it in his favour 116-112, 115-113 and 116. It is the heaviest weight division in which an Australian has been crowned a world champion.

Fittingly, the result was secured five years to the day that Brisbane teacher Jeff Horn produced a stunning boilover of his own against hall-of-famer Manny Pacquiao. This was an even bigger shock and Opetaia will now be revered in the same way as Rabbitohs legends John Sattler and Sam Burgess, who also battled through seemingly debilitating facial injuries en route to glory.

So damaged was his jaw that Opetaia couldn’t be interviewed in the ring after creating history. The talking was left to Opetaia’s trainer, Mark Wilson.

“He broke it in the second round,” Wilson said.

“He said an uppercut got him but he didn’t tell us until the end there. I think it was the 11th round where it really came to the fore, where it really opened up. I don’t know how he got back out there.

“He knew he had one [round] to go. I just said ‘Move, move!’ To Briedis’ credit he came back in the last few rounds, Jai was getting tagged. It was just an incredible performance.

“It’s something special. He’s a special kid. He was the first-ever Australian to win an amateur world title and now a world professional title. He will go down in the history books. He’s brilliant.”

Briedis, who finished strongly despite suffering a broken nose early in the 12-round thriller, was seeking a rematch in the moments after relinquishing his titles. 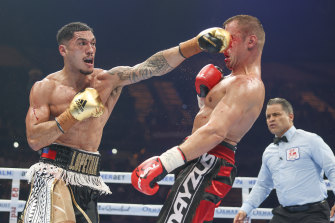 Jai Opetaia lands a punch on Mairis Briedis at the Gold Coast Convention and Exhibition Centre on Saturday night.Credit:

“I was sick for the last four days, it was a problem for me,” Briedis said in his broken English.

“I like [result] because I come back one more time. We make rematch.”

Asked if he felt the better man won, the man known as “The Latvian Punisher” replied: “Yes. Enjoy, you are a world champion.”

The outsider wasn’t overawed by the occasion. Opetaia drew first blood, opening up a cut over the Briedis’ right eye during a nerveless start. The 27-year-old held an advantage over three close rounds before landing the first significant blow in the fourth – a vicious right hook that bloodied the champion’s nose.

At the halfway point of the bout, Opetaia’s corner told their charge: You’re up 6-0.

The judges appeared to see it the same way. However, the fight took on a very different complexion thereafter. Briedis enjoyed positive moments early in the seventh and eight rounds before landing a series of bombs in the 10th and 11th.

It took all of Opetaia’s reserves of strength and courage to remain on his feet to reach the final bell.

There has been a resurgence in Australian boxing, spearheaded by Tim Tszyu’s impending world title shot and George Kambosos, who will attempt to regain the belts he relinquished to unified champion Devin Haney in a rematch later this year. But as it stands, Opetaia is the country’s only male world champion.

The odds were stacked against the local hope, who already made history when he qualified for the London games at the age of just 17. Some overseas bookmakers installed Opetaia as a 4-1 chance against an opponent who suffered the only previous loss of his 29-fight professional career via a narrow points decision to undefeated heavyweight champion Oleksandr Usyk. Which is why his promoter, Dean Lonergan, forked out almost $2 million to ensure the fight was staged locally.

Opetaia had to not only overcome his opponent but also a raft of injury setbacks that threatened his title shot. So badly battered was his left hand before it underwent surgery that he was unable to spar for more than six rounds. And once the Briedis fight was locked in, he had to postpone after suffering rib damage in sparring that required him to go under the knife.

The surgery scars were a clear target for Briedis, a renowned body puncher. But he overcome it all, courtesy of a jaw of granite, to make history.