Sydney are one win away from lifting the NBL championship trophy for the first time since 2005 after Dejan Vasiljevic did his best Jaylen Adams impersonation to break the Tasmania JackJumpers’ hearts in Hobart on Sunday.

With the game on the line and the Kings clinging to a one-point lead, Vasiljevic drained a three-pointer from a couple of metres beyond the arc to seal a 90-86 victory in game two of the NBL grand final series. 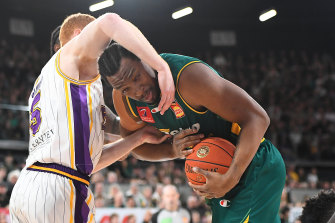 The Kings, who were without Adams due to his hamstring strain from the 95-78 win in game one, have a chance to sweep the five-match series when they return to Qudos Bank Arena on Wednesday night.

Vasiljevic, Kings captain Xavier Cooks, who was outstanding at both ends of the floor, and import Jarell Martin scored 20 apiece as the visitors overcame a sluggish start to eventually silence a boisterous sell-out crowd at the MyState Bank Arena.

Adams was instrumental as the hosts dominated the first period to lead 27-17, their first double-digit lead at the end of an opening quarter this season. 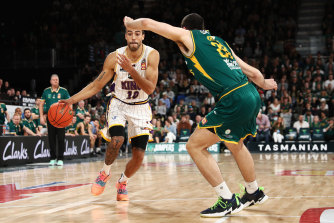 Kings forward Xavier Cooks was a constant presence against Tasmania.Credit:Getty

Kings coach Chase Buford pushed the envelope with his backchat to the referees and was hit with a tech foul for barking at them.

Cooks inspired Sydney in the second quarter, with his defence causing the JackJumpers constant headaches and, with Vasiljevic and Martin following his lead, they got back on level terms just before half-time.

But with journeyman guard Jarrad Weeks knocking down three long-range bombs, the JackJumpers took a 48-44 buffer into the main break.

Neither side could shake clear in the third quarter and the hosts had a slight 70-68 edge heading into the final 10 minutes.

The crowd went ballistic when Adams tied the scores at 83-83 with a high-pressure three with Vasiljevic’s hand in his face to hit the 30-point milestone and register his season-high tally.

He hit a remarkable off-balance three to make it a one-point deficit with 30 seconds left, but the Kings soaked up the shot clock and Vasiljevic stepped up when his team needed it the most.