Andre Muniz claimed the biggest win of his UFC career at UFC 262 in Houston, Texas, but the manner of his victory ensured that the 31-year-old will now be considered as a dangerous new contender in the UFC’s middleweight division.

Muniz, who earned his spot in the UFC with a submission victory on Dana White’s Contender Series in 2019, had already picked up a decision victory over Antonio Arroyo on his octagon debut, then followed up with an armbar finish of Poland’s Bartosz Fabinski last September.

And Muniz went back to his armbar technique against former Strikeforce champion and legendary former Brazilian jiu-jitsu competitor Ronaldo “Jacare” Souza on Saturday night to score a memorable victory.

After some early stand-up exchanges, the fight went to the mat when Muniz shot in for a takedown.

The pair scrambled on the mat, with Muniz happy to test his grappling skills against the eight-time jiu-jitsu world champion. 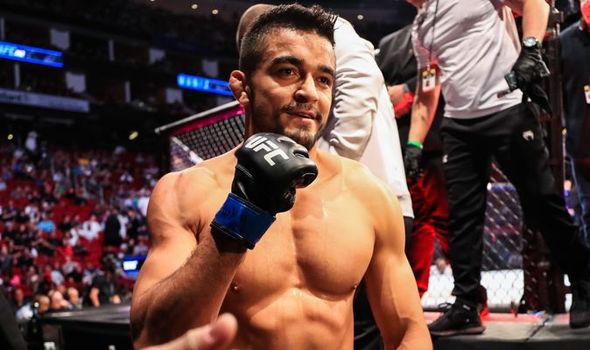 And, as Souza attempted to free himself from Muniz’s top pressure, the 31-year-old saw his opportunity and locked up a tight armbar submission.

Usually, when caught in a tight submission, fighters will know whether they can escape or not, and tap out when they realise they are trapped.

But “Jacare” attempted to fight through the hold, and it ended in painful fashion, when Muniz applied more pressure to the submission.

A clear snapping sound could be heard over the noise of the crowd as Muniz snapped Souza’s arm, prompting the referee to dive in and immediately stop the fight.

Replays showed the moment when the break happened, with the actual arm break itself largely obscured by the fighters’ position.

But the decisiveness of the victory, coupled with the fact that Muniz had just handed “Jacare” the only submission defeat of his 37-fight MMA career, meant that Muniz instantly made a name for himself as an emerging threat to the division’s best at 185 pounds by showcasing his own submission skills.

“First of all, I want to thank the public. We’re here for you,” he said after his victory.

Muniz then recalled the moment when he snapped Souza’s arm, saying, “Yeah. I heard it snap. I let go not only out of respect. I’m from jiu-jitsu,” he explained.

“I knew he could hurt himself more, but he didn’t let go.

“That’s a position I do a lot from school. When I saw his arm was trapped, I went for the submission and I got it.”