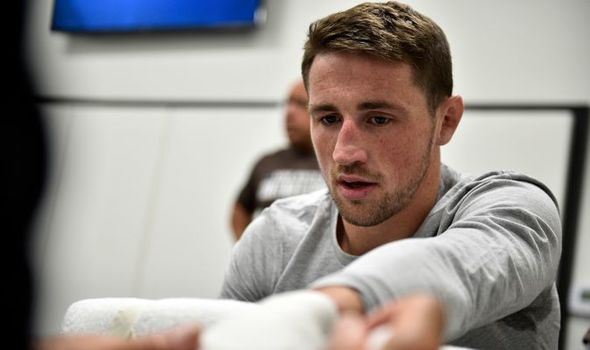 Manchester featherweight Brendan Loughnane has his sights set on the PFL’s 2021 featherweight title and the $1 million prize that comes with it.

The Brit kicks off his 2021 season against former UFC fighter Sheymon Moraes in the PFL’s unique league-based competition on Friday night at PFL 1 in Atlantic City, New Jersey, where he has been holed up in a 17-day bubble ahead of fight night.

Speaking during a virtual media day session ahead of his bout, Loughnane said he’s ready to deliver a statement performance and put the rest of the PFL’s 145-pound lineup on notice in his quest to end the year as champion.

“I’ve had such a fantastic camp. I’ve prepared vigorously all over the world. You name it, I’ve been there, and this is my time to shine,” said the 31-year-old,

The PFL was forced to cancel its 2020 season due to the COVID-19 pandemic, which left fighters like Loughnane without an outlet for their talents.

But the Brit made the most of his enforced hiatus by spending much of his time at the famed Tiger Muay Thai training camp in Phuket, Thailand, where he has worked alongside elite fighters including UFC lightweight Rafael Fiziev and former UFC bantamweight champion Petr Yan.

“I’ve been fighting since I was 16, three to four times a year, so to take this time off has been difficult,” he admitted.

“But I’ve just kept my foot on the pedal. I was actually in Thailand preparing. I was sparring Petr Yan, Rafael Fiziev, all these guys, and I just stayed in camp with them.

“I just thought, you know what? I’m here now. What’s the point in going home? I kept to the gameplan and just stuck with it.”

Loughane’s first assignment of the 2021 season comes against Moraes, a former UFC athlete who has won more than half of his career wins by knockout.

Loughnane said the Brazilian’s aggressive fighting style will be a perfect foil for his own approach, and will give him the perfect opportunity to deliver an attention-grabbing performance on fight night.

“I’m glad they’ve given me Sheymon Moraes for a couple of reasons. One, because he’s tried and tested in the UFC. He’s beat top UFC fighters and everybody knows who he is. So when I beat him, everybody will know who I am even more and it will solidify just how good I actually am.” he explained.

“I think for people there are still questions in the air, so I think I put a massive statement out against Sheymon and it sends a big message to the division.”

Loughnane, who said he’s “extremely proud” to be the U.K.’s lone representative in the PFL this season, said that he won’t be living it up at an afterparty following his fight. Instead he just wants to settle down to a good old-fashioned roast dinner.

“When I was younger, the main focus would be the afterparty and what I’m gonna do, this and that, and where we were meeting up. I just couldn’t care less now. I just want to win that much,” he grinned.

“(A roast dinner is) the only thing I’ve been missing. Get that Sunday roast ready!”