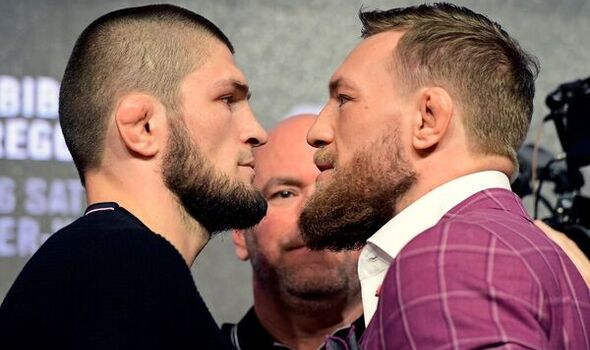 Conor McGregor has reponded to his long-term rival Khabib Nurmagomedov with a brutally harsh message to the Russian about his father. In a recent interview, Khabib had mocked McGregor by using a quote from him on the recent success from his team in the UFC and Bellator. Team Khabib now has a number of champions throughout MMA, most notably Islam Makhachev winning the lightweight title which both McGregor and Khabib both held.

Makhachev defeated Charles Oliveira in dominant fashion last month, choking the Brazilian out in the second round to win the belt after working his way up through the rankings.  As well as Makhachev, Khabib’s younger cousin, Usman Nurmagomedov, is now lightweight champion in Bellator after his win this past weekend.

In the interview, Khabib said: “Right now we have the current UFC and Bellator lightweight champions. This is amazing, this is amazing. I hear long time ago when one guy was talking about, ‘We’re here to take over. But we here to take over.” This, in reference to McGregor stating the same after a famous victory when he defeated Diego Brandao in Ireland.

After seeing the quotes, McGregor has been quick to respond to Khabib, with a message on the Russian’s father and former coach. He said: “I fight on! Your fathers plan is never complete because you quit and ran, brother. God bless. I’m still here if you wanna go again. But your fear of defeat means you’ve already lost. Run from it all you want. We all lose in the end. Death takes us all. I fear nothing but God.”

Khabib’s father, Abdulmanup Nurmagomedov, passed away in 2020 after dying from complications following contracting Covid-19. Abdul trained most of the fighters in Team Khabib, including Makhachev, who was thankful to him in his post fight press conference after defeating Oliveira last month.

McGregor has mentioned Abdul on a few occasions since his passing, clearly having hatred for his former opponent remaining. The two were embroiled in horrific out-of-the-ring controversies, firstly when McGregor was arrested after attacking the UFC 223 bus carrying fighters to a press conference.

Khabib had been on the bus ahead of his fight with Al Iaquinta, with McGregor throwing a trolley through the bus and injuring fighters in the process. He would be arrested after the incident and performed five days of community service.

McGregor was stripped of his lightweight title after the incident, and served a suspension before returning to face Khabib later that year. After the Russian won via a fourth-round submision, Khabib jumped out of the octagon and attacked McGregor’s team.

Khabib has since retired from fighting, now coaching the likes of Islam Makhachev and his cousins Umar and Usman. McGregot meanwhile will return to the octagon in 2023 after almost 18 months away from the sport when he lost fought Dustin Poirier.

McGregor is set to move up to the welterweight division, with a fight against Islam Makhachev unlikely who will look to dominant the 155lbs division. The Irishman will not fight until April at the earleist though, as he has yet to enter USADA testing.