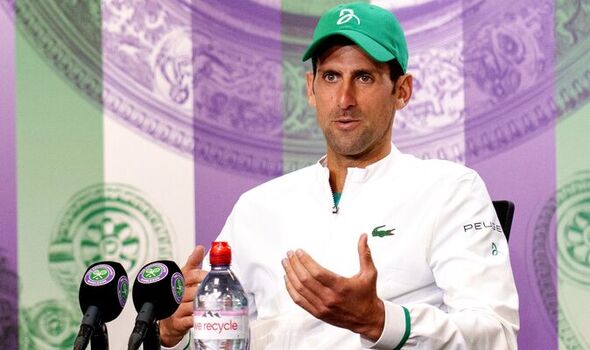 Wimbledon has responded after the world No 1 and their defending champion Novak Djokovic slammed their decision to ban Russian and Belarusian players from The Championships this year. It comes as the AELTC confirmed Djokovic would be able to compete during their spring press conference, with vaccination “encouraged” but not mandatory.

Several players, including Djokovic, have been vocal in their criticism of Wimbledon’s decision to bar all Russians and Belarusians from competing this year. The six-time champion at SW19 previously called the ban “crazy”, and the All England Club has now reacted to their defending champion’s remarks.

Asked by Express Sport about Djokovic’s comments, Chairman of the AELTC Ian Hewitt said: “Of course we respect the opinions which others have reached. This is a very difficult situation, we’re now trying to get across the reasons why, particular to Wimbledon and why we think it is right for Wimbledon, and we will continue to communicate in that fashion.”

Speaking in Belgrade last week, the champion of the last three editions of Wimbledon said he couldn’t support the tournament in their decision. “I will always be the first one to condemn the war. As a child of war, I know what kind of emotional trauma a war leaves. Us in Serbia, we know what was happening here in 1999,” he said.

“Ordinary people always suffer – we’ve had lots of wars in the Balkans. That being said, I cannot support the decision of Wimbledon, I think it is crazy. When politics interferes with sport, the result is not good.”

The 20-time Major champion also said the move was discriminatory, as he added: “Competing is their right, there’s a rule against discrimination in tennis, which states that everyone can play according to his ranking and not his nationality. Wimbledon has violated it.”

The AELTC chairman had also discredited claims from players that the ban was “discrimination” dUring the spring press conference, as he said: “It is not discrimination in the form that is being said. It is a considered view reached as to what is the right and responsible decision in all the circumstances.”

When explaining the decision to ban Russian and Belarusian players, Ian Hewitt and AELTC Chief Executive Sally Bolton explained that they had been working to government guidance which did not allow for direct entry into The Championships based on rankings alone, and gave them “in effect” two options – “declining entries or allowing entries but with only specific written declarations from individual players.”

They indicated there was “no viable alternative in a truly exceptional and tragic situation” but to issue a blanket ban. “Even if we were to accept entries with a declaration,” it would “risk their success or participation being used to benefit the propaganda machine of Russian regime,” the Chairman explained, saying they also had a “duty to ensure that no actions they take should put the safety of players or families at risk.”