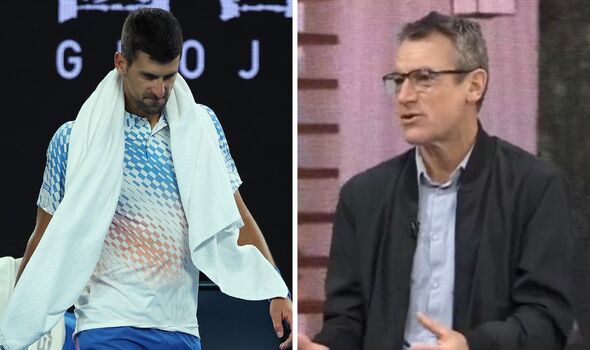 Mats Wilander has responded to suggestions that the hamstring injury Novak Djokovic is carrying at the Australian Open could be “fake”. The retired former world No 1 claimed it was “ridiculous” that people would suggest that the nine-time champion in Melbourne would waste energy pretending he was physically hampered.

Djokovic has been carrying an injury throughout the Australian Open after tweaking his hamstring more than two weeks ago at the Adelaide International. The world No 5 has since had a mixed experience with the issue in Melbourne, playing some flawless matches while also struggling and needing medical time outs in others.

It has led to suggestions that the Serb could be faking or exaggerating the injury, with Todd Woodbridge claiming that he was “playing it up” while his fourth-round opponent Alex de Minaur claimed that everything “looked good” to him when he lost to Djokovic 6-2 6-1 6-2 on Monday. But Mats Wilander has now hit back at the accusations in an impassioned rant against the doubters.

“When you hear people talk about it in a negative it’s like, what are you doing?” the seven-time Grand Slam champion told Eurosport. “It’s ridiculous that you’re accusing someone of something like that.”

Questioning the logic of the doubters, the Swede continued: “First of all there’s no way you want to let someone know in the locker room know you’re injured unless you’re injured. So to think it’s some kind of fake is ridiculous.

“Why lose energy? To me it’s a complete ridiculous argument. I mean, it’s his thing, of course he has pain, of course he’s injured but he can play tennis, that’s the only thing that matters.”

Djokovic himself has also been quick to call out those doubting the legitimacy of his injury. “I leave that to them, let them continue to doubt. It’s interesting that only my injuries are suspected, but when other players get injured and it affects them, then they are the victims, and I’m a pretend player,” he told Serbian reporters on Monday.

“I don’t feel like I have anything to prove to anyone. I have a recording and an MRI and an ultrasound which will prove it, whether I will publish it in the documentary, I don’t know, maybe, maybe I won’t. I am absolutely not interested in what people think, it is fun for me to continue the narrative [that is] different than some other players. I’m used to facing it, it motivates me and it gives me extra strength.”