Sally Capp first saw the difference in the smiles of people on the tram. Where a year ago, the tennis started tentatively beneath a thick, Omicron fog, on Monday it felt as though the city’s mood had lifted before the first ball was hit.

As she waited for the defending men’s champion Rafael Nadal to make his way onto centre court, Melbourne’s Lord Mayor reflected on how much things had changed since the first day of the last year’s Australian Open, when crowd limits and social hesitancy kept most of us at arm’s length from the tournament.

The mood of those who did come was inscrutable beneath their mandatory masks. 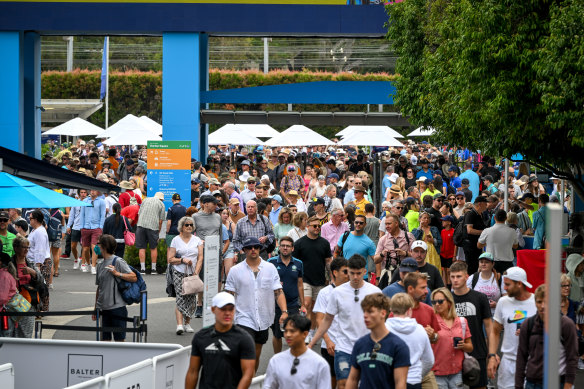 Tennis Australia hopes to see crowds of 900,000 at this year’s Open.Credit:Eddie Jim

“It’s that new sense of freedom,” she told The Herald and The Age.

“There are no restrictions, you don’t have to think about any regulations or measures prior to coming. The first thing I noticed coming in this morning was smiles on everybody’s faces.

“It was lovely. That sense of anxiety has gone and people are really relaxed.”

The only anxiety felt on the opening day of the Open was inside the tournament and broadcast headquarters, as Nick Kyrgios joined a growing list of big name players forced to withdraw by injury.

Beyond that, Melbourne Park greeted with a shady spot and cold drink its first full-sized crowd since the completion of a 10-year redevelopment that has transformed what used to be merely a tennis tournament into a gloriously chilled summer festival with the odd forehand thrown in.

Before the gates had opened, the queue of people waiting to get in stretched back up Birrarung Marr towards Swanston Street.

Among them was 75-year-old Maggie McIntosh and her wife Dianne Stollenwerk, who’d flown in from Baltimore to check a must-do off Maggie’s bucket list.

Maggie explained that she’d been to the US Open many times and Wimbledon and Roland Garros but until this year, work had prevented her from completing the grand slam set.

As an aside, the job she held for 30 years was serving the people of Maryland’s 43rd district as a representative of the state assembly. She was Maryland’s first openly gay representative, the first woman to chair the state’s appropriations committee and on Monday, among the first to experience the Australian Open how its organisers had intended before the pandemic intervened.

In a newly created “Beach Bar” area where tennis goers can rest their feet in the sand, order a drink from a cabana bar and seek refuge from the sun beneath a striped umbrella, Linda Thomspon said walking back into Melbourne Park after a few years away reminded her what the city did so well.

“It is what we have missed; this sort of big occasion where everyone is welcomed through the gates,” she said. “It is good to be back.”

The official crowd count for the opening day of the tournament was expected to eclipse the record figures for both the day and night session. On the opening day in 2022, just 25,000 people came through the gates.

To understand the difference between where we are now compared to a year ago, you needed only to catch some of Olivia Gadecki’s match on an outside court.

The West Australian teenager was unable to play last year after refusing to get inoculated against COVID. This year, no one cares what her vaccination status is – only that she won her first round match. 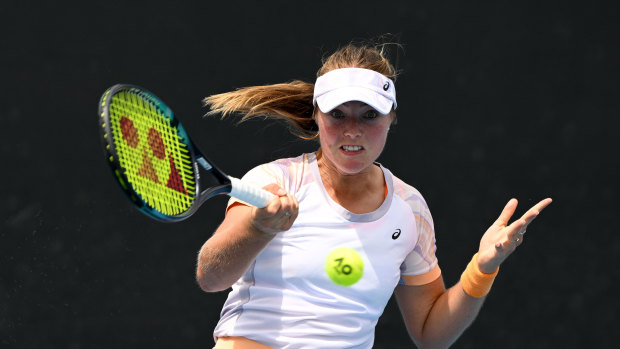 Olivia Gadecki won her first round match at the Open after not playing last year due to her refusal to be vaccinated against COVID-19.Credit:Eddie Jim

If last year’s deportation of Novak Djokovic showed us the politics of the pandemic were still raging, Gadecki’s journey from anti-vax to victory underlines how illogical much of the debate was.

Gadecki’s choice not to get vaccinated cost her a likely wildcard entry at last year’s Open but in the weeks and months that followed, she competed freely in tournaments in country Victoria and Canberra and was able to travel to Europe to join the women’s tour.

When asked on Monday about her decision to stay unvaccinated, Gadecki said she understood the consequences at the time and gave no hint of regret.

“There is not really much to discuss,” she said.

“I made a decision and at the end of the day I am here playing at the Australian Open.

“It is definitely a relief, but I knew what my decision entailed. I totally respect everyone’s opinion and personal choice.”

Where Djokovic was pilloried by some of his fellow players for refusing the jab, Gadecki was lauded by Ash Barty for choosing her own path.

On another court at Melbourne Park, Talia Gibson couldn’t match the result of her friend and doubles partner Gadecki, but she said the sound of walking out to her first grand slam match would stay with her for a long time.

Gibson came to Melbourne for qualifying last year but her family, who live in Perth, were unable to watch her from the stands because of Western Australia’s closed border. On Monday, her parents and several friends were there shouting themselves hoarse but could hardly be heard above the din.

“I definitely didn’t expect that many people to be out there,” she said.

“Just thinking about it now I get goosebumps. Walking out onto that court, at first with my head down and just hearing the roar of the people who were there to support me, it made me really happy.”

Gibson and Melbourne both.