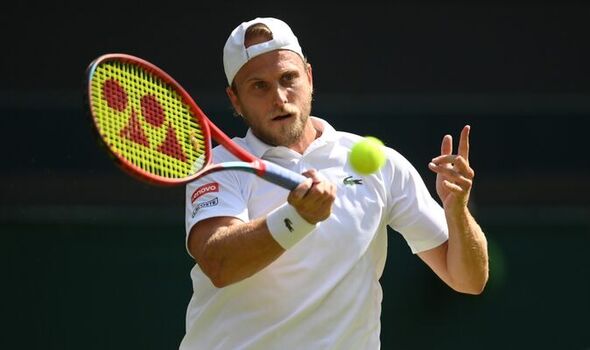 Denis Kudla has had his say on Wimbledon’s decision to ban Russian and Belarusian players from The Championships amid the war in Ukraine. The Kyiv-born American still has family in Ukraine and also spoke out on the ATP’s decision to remove ranking points from Wimbledon as a sanction for their ban.

Kudla has been in good form on the grass so far this season, reaching the Surbiton Challenger final and making the second round of Queen’s as a lucky loser, pushing defending champion Matteo Berrettini to three sets. But the world No 82’s ranking will take a hit when his Wimbledon 2021 third round points are removed as a result of the ATP’s decision to remove all points from the tournament.

The American was born in Kyiv and still has family in Ukraine, but refused to criticise the ATP or Wimbledon after the tours sanctioned the event for banning Russians and Belarusians in response to the war. “It’s a tough decision, I understand obviously both sides of it,” he said after his three-set loss at Queen’s.

Kudla – who lost to eventual-champion Novak Djokovic at SW19 last year – also explained Wimbledon’s decision as he said: “You know, ATP’s choice of not wanting to discriminate against their players but I also see not letting the Russian players play because of Russia liking their athletes winning matches so it’s tough.”

JUST IN: Peniston continues dream debut with gritty win vs Cerundolo at Queen’s

And the eight-time Challenger title winner also revealed that players were not consulted by the ATP before ranking points were stripped from the tournament, something his opponent Berrettini also claimed earlier in the week. “Sucks for me personally, I have a lot of points there, hurts my ranking but like I said, it is what it is,” he continued.

“I felt like it would have been interesting to have more player input, if they asked us, we really were not informed much before that decision to see what collectively as a group what we thought.”

But the 29-year-old was not deterred by the lack of ranking points as he added: “There are bigger problems in the world than Wimbledon points or not, there are people dying so I just try to take care of my business and try to keep things in perspective.”

On Monday, last year’s Wimbledon runner-up Berrettini also revealed that the ATP failed to contact players before announcing their decision. “Nobody contacted us. Nobody asked us our opinion about it and I think it shouldn’t work like that. We should do something to avoid this kind of situation because I think this is the biggest decision the ATP took in the last 20 years, at least that I remember so I wish it was handled a different way,” he said.