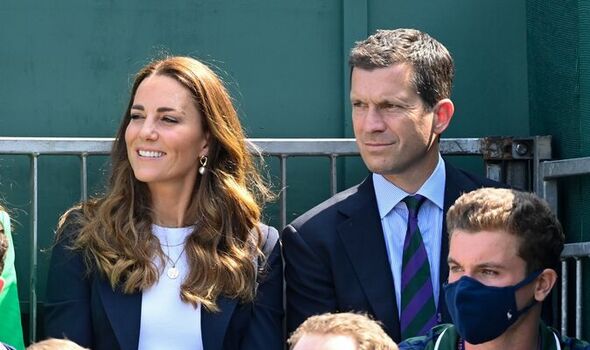 Tim Henman has explained the All England Club’s fears over Russian propaganda at Wimbledon after banning all players from Russia and Belarus. It comes after speculation that the decision to ban players was made to spare Kate Middleton from the possibility of presenting a winners’ trophy to a Russian player, with the risk that the royal family could be seen to be supporting the Russian regime.

Henman is a member of the AELTC board and elaborated on the club’s decision to ban Russian and Belarusian players from The Championships this year amid news that the ATP could strip the tournament of its ranking points. The retired British pro admitted that supporting Russian “propaganda” was a fear for the club after The Telegraph reported the decision was in part made due to the ‘merest possibility’ that the Duchess of Cambridge would have to hand over the trophy to a Russian or Belarusian competitor.

The once British No 1 also admitted the decision was government-led, with the AELTC Chairman and Chief Executive previously confirming the club had just two options – issue a blanket ban or require declarations against the war from players representing the two nations. “There’s no winners, from Wimbledon’s point of view it certainly reiterated the point that this has been massively government-led,” he said on Amazon Prime.

“You look at the options available, for Wimbledon to make the Russian and Belarusian players sign a declaration against the war and the regime I think puts them and their families in a very serious and dangerous position. That’s not also talking about the possibility of those said players in the second week receiving a trophy on Centre Court and the propaganda that goes with that.”

JUST IN: Nadal admits last win over Shapovalov was ‘a joke’ ahead of rematch

Henman, who was one of the decision-makers as a member of the AELTC board, added: “I for one am not in favour of that. And that’s a horrible decision, and the other horrible decision is that you don’t invite the Russian and Belarusian players.” The Brit was also asked why the All England Club didn’t give the players an option of signing a declaration condemning Putin and the war, and doubled down on the fears of a Russian player like world No 2 Daniil Medvedev receiving a trophy on Centre Court, with the Duchess of Cambridge given the duty of presenting the trophy as the Patron of the All England Club.

Asked whether he regretted not giving players the chance to sign the declaration, he responded: “No I don’t because I think then you’re not taking into the account that opportunity of the exposure and the propaganda of those players playing on one of the biggest stages in the sport, potentially receiving the trophy. How comfortable are we with that narrative?

“We’ve seen how Russia have used that exposure in the past and so there are two elements to that, and whether the Russian or Belarusian players would have been comfortable signing a declaration is one element but the propaganda issue is another and I don’t think that was something that the All England Club were comfortable with.”

The 47-year-old was also vocal about the uncomfortable position the British government left the All England Club in, with the government guidance removing the automatic entry for players by ranking and giving the options of banning all Russian and Belarusian players or banning those from the nations who failed to sign a declaration.

“This is directive guidance from the government, when you reflect on covid there weren’t many laws but there’s a lot of guidance out there,” he said, inferring that the club’s hands were metaphorically tied by the government. “As a sort of British institution are Wimbledon expected to turn around and say to the government ‘actually we know best, we’re going to do our own thing’? That’s not going to happen and so therefore when you actually look at those real options, a declaration or actually not inviting them, it’s a nightmare.”