The qualifying technicality that ruled Nick Kyrgios out of ATP Cup

Nick Kyrgios will miss the tournament that reignited Australia's love for the controversial superstar after he slipped behind Alex de Minaur and John Millman in the ATP world rankings.

The 12 countries – and the four men in each team – which will contest the shortened tournament at Melbourne Park were revealed on Tuesday with Kyrgios a notable absentee. 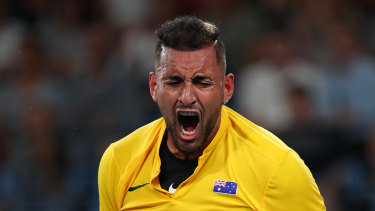 Kyrgios played with passion during the ATP Cup.Credit:Getty Images

Kyrgios was the star of the last Australian summer at the inaugural edition of the tournament, leading the charge for bushfire relief while playing some thrilling tennis alongside de Minaur in Sydney.

But because he has not played on the ATP Tour in 11 months, he has slipped to No. 46 in the world rankings.

De Minaur is currently ranked 23rd and Millman is 38th.

Given there are only two singles slots – which are taken by the two highest-ranked players from each nation – Kyrgios would only have featured if one of de Minaur or Millman were unavailable through injury.

That has left the 25-year-old with little choice but to register for one of two ATP 250 tournaments in Melbourne instead, as he has not played in an official tour match since retiring from the first round of the ATP Acapulco tournament in late February.

The two tournaments will be run concurrently with the ATP Cup.

The absence of Kyrgios will be a blow to both his preparation for his home grand slam and igniting interest in the summer of tennis, as the Australians' clash against Great Britain prior to the 2020 Australian Open was arguably the highlight of the local calendar.

Kyrgios also spoke regularly about how playing in a team environment brings out his best tennis.

He made a memorable run at last year's Open, which included a thrilling five-set win against rising Russian star Karen Khachanov before bowing out to Rafael Nadal – a match which was watched by more than three million people around the country.

While Kyrgios and Roger Federer will be absent from the ATP Cup, headline stars Nadal and Novak Djokovic will line up for Spain and Serbia – who contested last year's inaugural final.

The 12 teams will be split into four groups of three at the draw on January 20.

After a round-robin group stage, the winner of each pool will progress to the semi-finals.