Paris: Queues were back at Roland Garros as spectators lined up in the morning sun to attend the first day of the French Open on Sunday.

A 300-metre line formed outside the main entrance before Japan’s Naomi Osaka started her campaign with a 6-4, 7-6 (7-4) win against Romanian Patricia Maria Tig.

The Japanese four-time major winner divided opinion ahead of the tournament with her decision to boycott press conferences, but the debate made no impact on her performance on a sun-bathed Philippe Chatrier court. 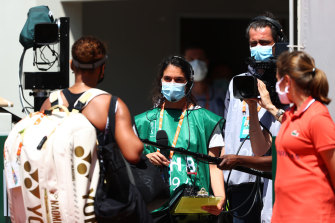 Naomi Osaka is interviewed on court after winning her first round match against Patricia Maria Tig.Credit:Getty Images

Former world No.1 Angelique Kerber became the first major casualty at Roland Garros, her poor record at the French Open continuing when she was knocked out by Ukrainian qualifier Anhelina Kalinina.

Australian Ajla Tomljanovic, meanwhile, progressed with a 6-2, 6-4 win over Kateryna Kozlova, from Ukraine.

With none of the ‘Big Three’ – Roger Federer, Rafael Nadal or Novak Djokovic – in action on Sunday, the attention in the men’s draw was on two-time runner-up Dominic Thiem, who was playing Spain’s Pablo Andujar, and Greek fifth seed Stefanos Tsitsipas, who was scheduled to play local hope Jeremy Chardy.

Gauff doubles up with idol Williams

The other surprise news of the day came when the doubles draws were announced, with Coco Gauff and Venus Williams playing together in the women’s competition.

Gauff, 17, has beaten Williams, 40, twice in grand slam singles action – at Wimbledon in 2019 and at the Australian Open last year.

Williams is a seven-time major singles champion and owns another 14 slam doubles titles that she won with her younger sister, Serena.

The No. 1-seeded team is Hsieh Su-Wei and Elise Mertens.

With temperatures reaching 20 degrees, Panama hats and sunshades were de rigueur courtside – a contrast with last year’s wind jackets and umbrellas after the showcase claycourt event was moved to September to avoid France’s first wave of coronavirus.

While only 1000 fans were allowed at Roland Garros each day last year, this year’s French Open welcomes up to 5388 spectators a day up until June 19, when the daily limit will increase to 13,146 as national COVID-19 restrictions ease.

There will also be night sessions for the first time, with the ‘match of the day’ starting at 9pm local time (5am AEST) from Monday.