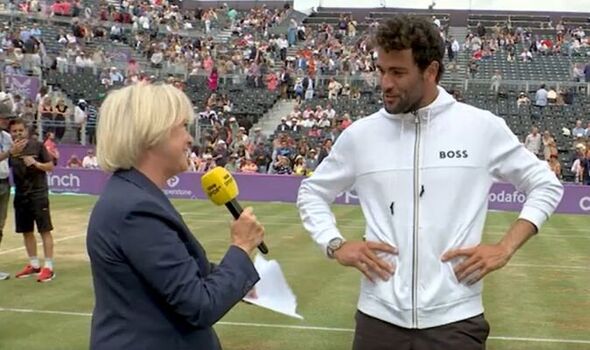 Sue Barker admitted she was welling up after Matteo Berrettini paid a touching tribute to the outgoing BBC presenter following his victory over Filip Krajinovic in the Queen’s final on Sunday. The 66-year-old is set to stand down from her role with the BBC following the conclusion of this year’s Wimbledon.

“I just want to say congrats for your career,” Berrettini told Barker after the presenter had interviewed him on court following his Queen’s title success. “I heard it’s going to be your last Queen’s and last Wimbledon. So good luck with the rest of your beautiful life. And congrats.”

Barker thanked the star for his kind words before turning to BBC pundit John Lloyd and saying: “I’m welling up now, oh dear. What a nice guy.”

Barker’s BBC departure was announced earlier this month as the veteran broadcaster explained the time was right for her to walk away from the corporation. “What a wonderful time I’ve had working on some of the biggest sporting events around the world,” the former tennis star said. “I will miss it terribly but after 30 years I feel the time is right for me. I’ve worked with the best of the best.”