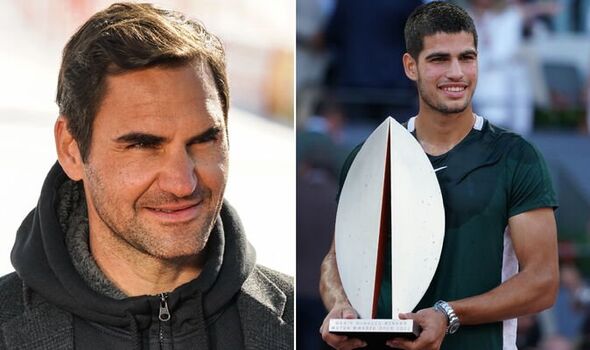 Roger Federer will be ‘in awe’ of Carlos Alcaraz after his sensational Madrid Open triumph, according to Annabel Croft. On Sunday, Alcaraz scooped his fourth title of 2022 and the second Masters 1000 crown of his career after his Miami Open victory last month.

The 19-year-old Spaniard followed up his stunning wins against Rafa Nadal and Novak Djokovic by beating second seed Alexander Zverev 6-3 6-1 in his homeland. He enjoyed one of the most magical underdog runs to a title in recent tennis history and is undoubtedly one of the sport’s biggest rising stars.

His performances in Madrid have drawn comparisons with Federer, who would never bow down to pressure in the early years of his phenomenal career. And Croft believes the Swiss icon would’ve been impressed with Alcaraz’s attitude and confidence against the game’s biggest names.

She told Amazon Prime: “He [Alcaraz] doesn’t give you the impression he is going to shy away from pressure like we always said about Federer. Federer is somebody who would walk towards the fire and tackle pressure head-on, enjoy it, embrace it and like to put the young ones in their place. I’m sure Federer is sitting at home watching him absolutely in awe.”

JUST IN: Alcaraz beats Djokovic and Nadal to win Madrid as Raducanu injured

After his memorable triumph in Madrid, Alcaraz expressed his delight with managing to beat three players of Federer’s ilk en route to victory. After watching the tournament as a child, he described his exploits in the Madrid Open as the ‘best week of his life’.

He added: “It feels great to be able to beat this kind of player, two best players in history. Zverev [is] number three in the world; such a great player Zverev is. I would say this is the best week of my life, so I’m going to enjoy this moment a lot.”

Alcarez is now set to rise to sixth in the ATP world rankings ahead of the French Open later this month. And after securing his second Masters 1000 title, he will be eyeing a maiden Grand Slam success on the clay at Roland Garros.