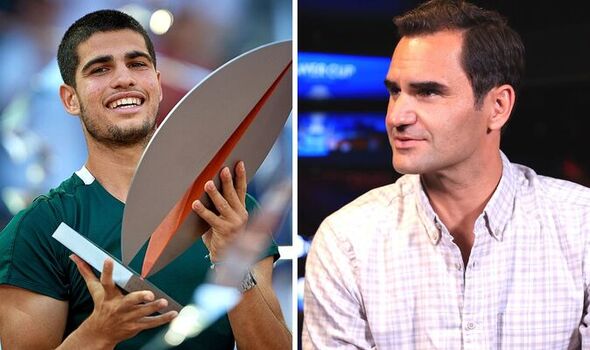 Carlos Alcaraz has caught the eye of none other than Roger Federer after his historic triumph at the Madrid Masters, where he became the first man to beat Novak Djokovic and Rafael Nadal back-to-back on clay before becoming the youngest ever to lift the title. The Swiss star and his agent Tony Godsick are now keen to sign the teenager up for the Laver Cup.

Alcaraz’s stunning 2022 season continued with what he called the “best week of his life” at the Madrid Open. Turning 19 during the tournament last Thursday, he finally defeated Nadal on his third attempt before following it up with a win over Djokovic in what was their first meeting, and went on to topple defending champion Alexander Zverev to lift the title.

Now sitting at No 6 in the world, the Spanish teenger has caught the eye of another great, with Federer said to be watching Alcaraz’s progress. And it seems the 20-time Major champion has been impressed by what he’s seen, as he and his agent could be set to propose the five-time title winner join Team Europe at this year’s Laver Cup.

According to Marca, Federer and Godsick have bought into the Alcaraz hype and want to see him at the Laver Cup, a team tournament created by the Swiss ace and his TEAM8 management company. Federer and Nadal are currently confirmed for Team Europe and a spot is now set to be offered to the 19-year-old for this year’s edition of the event, to be held in London’s O2 Arena from September 23 to 25.

With the 40-year-old currently sidelined following a third knee surgery last year, he is now the only member of the Big Three that Alcaraz is yet to face. And it appears the newly-crowned Madrid champion would love a meeting with the former world No 1 as old footage has surfaced showing Alcaraz declaring Federer as his idol over Nadal.

The video of an interview with a 12-year-old Alcaraz shows the world No 6 dubbing Federer as his idol and favourite player. When asked about his number one goal in tennis, he says it is to win the French Open and Wimbledon.

And Alcaraz could well fulfil his childhood dream next month, as he is now the bookies’ second-favourite for the title behind 13-time champion Nadal. Following his triumphant week in Madrid, the 19-year-old withdrew from this week’s Rome Masters meaning the French Open will be his next tournament.

And he has staked his claim on the upcoming clay-court Major, admitting he wanted to win a Grand Slam title this year and setting his sights on doing it as soon as possible in Paris. “Winning here gives me a lot of confidence ahead of Roland Garros and it’s something I have as my goal,” he told Marca after picking up his second Masters 1000 title. “My goal this year is to win a Grand Slam and hopefully it will be in Paris.”